FRONTROW is a dynamic and rapidly expanding direct selling company in the health, beauty, and wellness industry in the Philippines today. It is a 100 percent Filipino owned corporation spearheaded by two of the most-promising new-breeds of entrepreneurs, Raymond ‘RS’ Francisco and Samuel Verzosa. As new blood of businessmen, they introduced a new formula for success in the multi-level marketing industry in order to build a more forward-driven company that is FRONTROW.

Since the boom of the vanity industry earlier this decade, more and more Filipinos, both men and women are opening their options to beauty enhancements and treatments making it a very lucrative playground for radical capitalists. 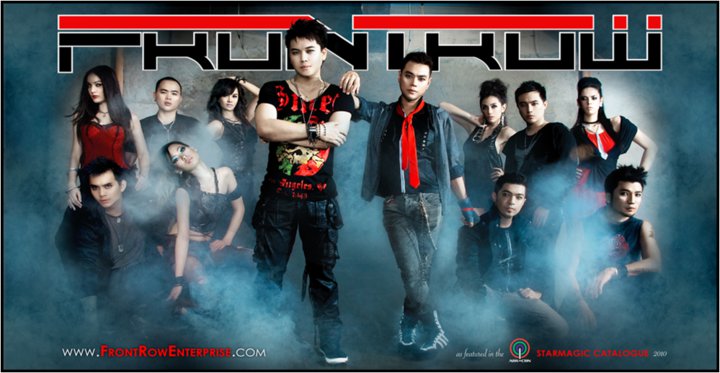 Amidst the current global recession, many individuals are turning into new options without leaving their current employment. Individuals who want to try their hand in business are venturing into direct-selling as a start of their voyage as entrepreneurs utilizing their current network of contacts both in their community and the worldwide web.

With these trends, FRONTROW has positioned itself in the forefront and is emerging as the new face of multi-level marketing industry. As a young company, FRONTROW has already received recognition in the business sector because of its competency and increasing membership of more than 5000 members all over the Philippines.

The combination of beauty, health, and wealth is the company’s formula in building an empire consisting of young entrepreneurs.

Hailed in the 2010 Philippines Yearbook: The All New Power 88 as the hottest multi-level marketing firm of today’s generation, FRONTROW Enterprise Philippines, Inc. (FRONTROW). As a young company, FRONTROW has already received recognition in the business sector because of its competency and increasing membership of more than 5000 members all over the Philippines.

You will be entitled for acting, dance and modeling workshops for FREE. This is guided by expert mentors around. The past workshop was guided by Beverly Salviejo of ABS-CBN’s Immortal (Acting), Ken “Flitz” Suarez of GMA’s Party Pilipinas (Dancing), Deo Bantillo of Philippine All Stars (Dancing), Mr. Dave Ian Basa (Print Modeling), Direk Cata Figueroa of Philippine Fashion Week (Ramp Modeling), and Ma’am Grace Molina of PMAP (Ramp Modeling).

Proud to say our official Photographer is Anto Garcellano. He is an Art Director of PULP Magazine and has done features on WOLFGANG, REKLAMO, KJWAN, URBANDUB, KUH LADESMA, PUPIL, ITCHYWORMS, and MARCUS HIGHWAY. Needless to say, these are just a few of the big names that Garcellano has proven his worth with.

Want to tour around the world? What’s the best thing with FrontRow is that you can travel around the world for free, all expense paid trip by the company. Our first tour incentive was in Hongkong Disneyland (April 21-24, 2011), Beijing China (Jun 16-20, 2011), Thailand Bangkok (Oct 6-10, 2011). Come and join our next tour in Singapore!

Empowered with potentials of self-growth and company’s future expansion, FRONTROW’s members are open to transformation and are committed to achieve financial freedom and success by nurturing a positive attitude and enhanced self-image.

Are you ready to BE ONE OF US?

FRONTROW Mindanao is inviting you to attend an aspirants’ orientation about the company and its upcoming events!

A lot of big opportunities await you! Fill up your personal details and choose your preferred schedule of aspirants’ orientation to reserve your slot. Just wait for a notification via SMS for slot confirmation.