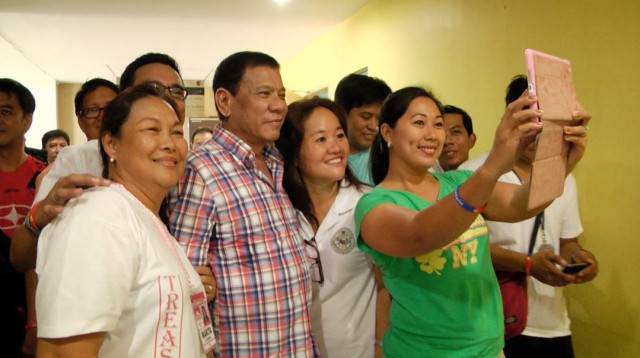 In a surprise development, which even his closest advisers did not expect to happen, Davao City Mayor Rody Duterte today gave a hint that he has finally “found his soul” and that he would run for President.

In his weekly program “Gikan sa Masa, Para sa Masa” (From the Masses, For the Masses) aired every Sunday morning on ABS-CBN Davao City, Duterte parried off his persistent co-host of the program, lawyer Geraldine Tiu who asked whether he was running with a dismissive “Oo na, tatakbo na lang ako.”

“Oo tatakbo na ako. Ang kulit nyo, eh. Pati ikaw,” Duterte told Tiu who was obviously taken by surprise by the Mayor’s statement.
(Okey, I will run. You’re you insistent, including you.)

Duterte, however, followed up what was perceived to be a declaration that he would run for President with the usual deadpan joke.

He said he would run around the city from one district to another.
When pressed by Tiu later whether his statement that he would finally run referred to the Presidential contest in 2016, Duterte jokingly answered “Uh, Uh, Uh!”

The statement that he would run, however, did not escape the attention of the netizens who have long asked Duterte to run for President.

Video clips of the program were immediately posted in the social media.

Whether his declaration was a joke or the real thing, today’s TV program marked the first time that Duterte did not categorically state that he was not running for President.

Duterte has been very vehement and categorical in dismissing endorsements for him to run for President citing old age, the lack of finances and the opposition of his family.

There was none of those reasons in today’s TV program prompting observers to conclude that the Davao City Mayor was softening up and could still be convinced to run for President.

In today’s program, Duterte admitted that he was receiving a lot of pressure from different groups and even ordinary people asking him to run for President.

He also mentioned that a group of anonymous businessmen have volunteered to help him raise funds for the campaign.

The businessmen, who belong to a group called Anonymous Patriots for a Peaceful and Progressive Philippines (AP4), declared they do not want any publicity or recognition and that they were merely showing their support for an incorruptible political leader who could bring about peace and security.

Only one member speaks for the group, businessman Benigno Gopez, a former waiter who became a successful businessman and sportsman. He who owns a helicopter leasing company.

Duterte is known to be averse to receiving money from campaign contributors who have vested interests saying it would affect his decision making as a leader.

Duterte is expected to make a formal announcement on his Presidential plans next week.