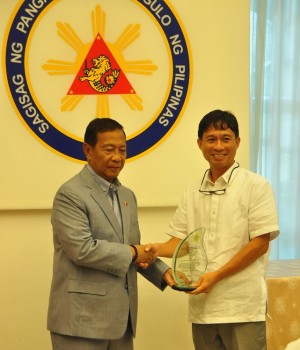 TAGUM CITY—The efforts and initiatives of the City Government of Tagum in housing were recognized by the Housing and Urban Development Coordinating Council (HUDCC) for its sound legislative actions, pragmatic policies, innovative anti-squatting programs and projects and its effective implementation.

The HUDCC, headed by Vice President Jejomar Binay, said this enhanced the capacity of the local government in addressing housing and urban development concerns that are recognized by the national government.

The recognition, which was presented through a plaque, was bestowed at the Coconut Palace, the official residence of the Vice President in Manila, and was received by Engr. Bernardo Castor, who heads the technical working group of the Local Housing Board chaired by Mayor Allan L. Rellon.

This is still part of the national government’s drive against professional squatters and squatting syndicates, in its goal of recognizing best practices in the local government.