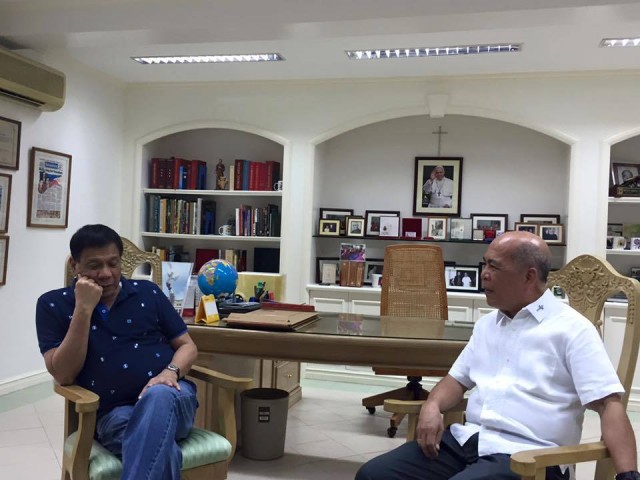 Five days after his joke-gone-too-far about Metro Manila’s traffic and the Pope created an uproar in the largely Catholic country, leading presidential contender and Davao City Mayor Rody Duterte vowed to limit his use of profanities during his public speeches.

Duterte, whose mother, the late school teacher Soledad Roa Duterte, was deeply religious and who studied in Catholic schools in Davao and Manila, yesterday promised Davao Archbishop Romulo Valles that he would impose a fine of P1,000 for every cuss word that he utters.

“I visited and talked with Archbishop Romulo Valles and Bishop George Rimando, together with Monsignor Paul Cuison and my Executive Assistant Bong Go,” Duterte posted in his Facebook

“I was admonished and lectured on Christian Values and in return, I told them that I would lessen my use of cuss words,” he said.

“I am even regulating myself and will donate P1,000 to Caritas Davao everytime I would swear,” Duterte added.

“I am also planning to visit the Vatican soon. It was a good meeting and I would like to thank my friends in the Church for their time,” he said in his post.

The call on the Davao Archbishop was reportedly arranged by his friends within the Catholic church in Davao, Vicar General Monsignor Paul Cuison and Bishop George Rimando.

On Monday, Nov. 30, Duterte caused a national uproar in the largely Catholic Philippines when in a joke about Metro Manila’s traffic problems and the visit of Pope Francis last year, he used a common Filipino cuss word.

He immediately issued an explanation and an apology the following day saying that the use of the cuss word was not directed at the Holy Father but at the inability of government to address Metro Manila’s daily traffic woes.

Some Catholic leaders, however, immediately pounced on Duterte denouncing him as unfit for the Presidency because of his common use of profane language in his speeches and his insult on the Pope.

Stung by the denunciation, especially from CBCP President Bishop Socrates Villegas, Duterte showed his natural fighting instinct and created another controversy when he claimed that as a child, he was sexually molested by a priest.

It was Msgr. Cuison who first came to the defence of the controversial Davao City Mayor and leading presidential contender.

Cuison said those who knew Duterte personally could swear that the man who turned Davao City from a Killing Fields of Communist assassins to become one of the world’s safest cities is a kind-hearted person.

Cuison urged those who do not know Duterte not to judge him too harshly because of a joke which went awry.

Reports of the friendly meeting between Duterte and the Davao Archbishop were received warmly by Duterte supporters.

“I’m so happy to see the Mayor visiting the priests. They’re not like those in the CBCP who are always confrontational,” wrote Frances Anne Lim, a Duterte supporter from Makati.

Similar posts from Duterte followers who are either members of the religious community or lay leaders of the Catholic church, flooded the social media.

The pictures of Duterte humbly visiting the Davao Archbishop were a relief for his followers who were worried about a strained relationship between the Catholic Church and the man who could be the country’s next leader.