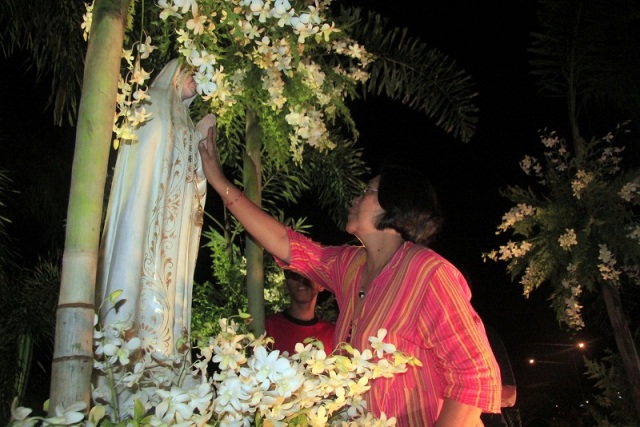 The merry month of May, once again, give us an excuse to draw from the wellspring of Filipino cultural delights and curiosities to focus on the annual highlight of small community social life in the Philippines- the Santacruzans featuring the town’s prettiest and handsome young citizens. This is a testament to our optimistic attitude in life and a resounding proof that, come hell or high water, the Pinoy spirit of resilience and looking forward to the better, will always prevail.

And this is what Tagum City had magnified through the holding of the annual Flores de Tagumeño, highlighted by the much-anticipated Santacruzan de Tagumeño featuring 26 beautiful women playing as Sagalas who are not just bearing pretty faces but also has a reputable character, as recommended by their respective GKK Gagmayng Kristohanong Katilingban (GKK) communities.

Now on its fourth year, Santacruzan is held annually in the warm month of May and is considered to be the “Queen of Filipino Festivals”. Beautiful belles are selected to participate in this colorful pageant parade. The stars are selected not for their looks alone, but for their personification of traditional feminine qualities. It is a week-long street pageant in Tagum metropolis honoring beautiful Tagumeño maidens and their handsome escorts under the hand-carried bamboo arc’s decorated by fragrant native flowers.

Through good times and bad times, Santacruzan will always be part of the Filipino experience. It is considered to be the Filipinos’ ultimate expression of community. It is a time to rejoice, to welcome, to worship, to give thanks, be merry, no worries and be happy.

The City Government of Tagum led by the religion-oriented City Mayor of Tagum Hon. Rey T. Uy and the City of Tagum Tourism Council chaired by the enthusiastic Madam Alma Uy, in partnership with Tagum’s Parishes in the Diocese under the watch of His Excellency Bishop Wilfredo D. Manlapaz, DD, STD, the religious tradition of celebrating Santacruzan has been revived to instill values and religious awareness among Tagumeños.

People from all walks of life had converged to the Parish of Christ the Eucharistic King to hear the Holy Mass officiated by MSGR. Ulysses P. Perandos which kicked off the culmination of the festival last May 26, 2012.

The grand Santacruzan is also the convergence of the Best Fashion Designers in Davao City and Tagum City who plays a big role in the event, giving glitters to the 26 Sagalas representing the different virtues reflecting the character of Blessed Virgin Mary. They also staged the first-ever Moda de Mayo featuring the art of sagala couture and fashion presentation.

Tourism Council President Alma L. Uy stressed the importance of the event in honoring the personality of the children in becoming responsible Christians and citizens of the community. “Dapat ipadayon nato ni kay dako kaayo ni ug tabang to develop the personality ng bata particularly on the values formation of our children,” she added.

She also quipped that the said festival did not only aim to showcase grand pageantry and commercialization but to highlight the role of the Blessed Virgin Mary in the lives of the Christians, a thing which was supported by Bishop Manlapaz.

The night before the grand Santacruzan, Harana para kay Maria was staged at the city’s Freedom Park which featured a choral competition joined in by kids from different GKKs. A showcase and display of the gowns of the Santacruzan and followed by a grand fashion show of the gowns and other collections of the participating designers with their respective Sagalas was held at Gaisano Grand Mall Atrium. After which, a vigil for the Virgin Mary was conducted with the members of Handmaids of the Lord, the CFC Singles for Christ with Children from GKK’s, Legion of Mary, Couples for Christ and Single for Christ leading the Rosary.

Undoubtedly, the local government of Tagum takes a bold role in pioneering a noble mission of preserving the Filipino’s way of honoring Mama Mary as well as appreciating the excellence of Mindanao-based fashion designers. The whole city have learned, experienced and will forever treasure this religious celebration as they acknowledge it as an opportunity to hand down to younger generation the country’s rich religious heritage of Santacruzan that our ancestors have passed on through the years.