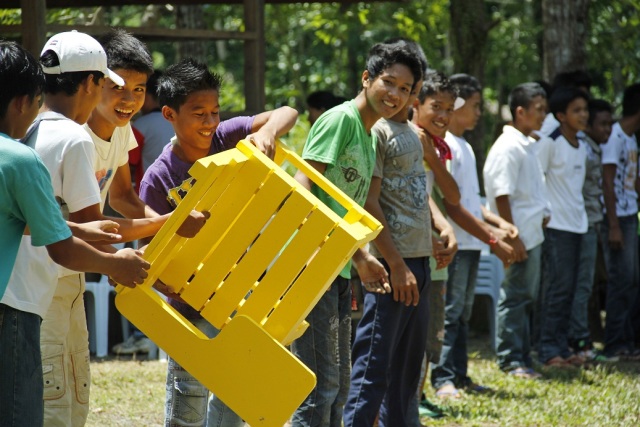 CITY OF TAGUM, DAVAO DEL NORTE – The local government-initiated Care for School Chairs Program was given a boost as the Philippine Amusement and Gaming Corporation (PAGCOR) donated 2.7 million pesos recently, a thing Mayor Rey T. Uy – the over-all project implementer – is thankful for.

The local chief executive announced to the employees of the city government that PAGCOR Chairman Cristino Naguiat, Jr. had assured him that his agency is willing to put in another financial support of the program if there are still logs to be processed into school chairs.

The Care for School Chairs (CFSC) Program -which marks its first year anniversary this August – is a brainchild project of Mayor Rey T. Uy which fabricates school chairs from confiscated logs donated by Department of Environment and Natural Resources (DENR) and are distributed for free by the city government to schools not only in the city, but also to needy schools in Luzon, Visayas and in Mindanao.

Meanwhile, the LYR Group of Companies in partnership with the Rotary Club of Tagum also donated paints worth 500,000 thousand pesos last August 22, 2012 that was formally accepted by Mayor Uy.

He also extended his gratitude to LYR and the Rotary Club for flexing its corporate social responsibility that will create a big impact in alleviating the quality of education here in the region.

Penongs, a well-known restaurant with several stores in Davao Region, threw its full support to the program by also donating 30,000 thousand pesos.

As of August 21, 2012, a total of 66,339 pieces of school furniture consisting of armchairs, desks, tables, kiddie chairs, computer tables, bookshelves, rostrums were already made and delivered by LGU Tagum through the CFSC since August 2011.