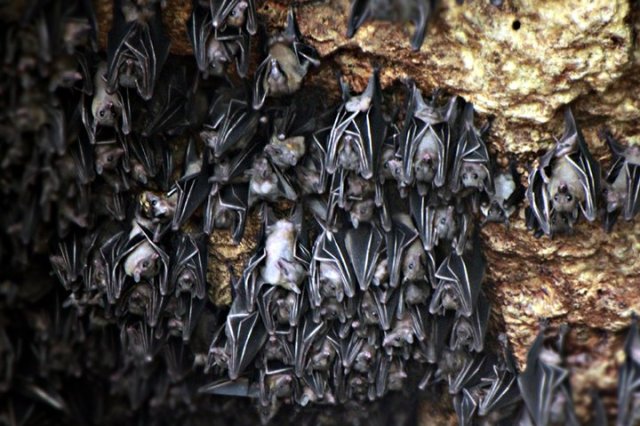 A lot of people don’t know that the world’s largest colony of bats is found right here in Davao.

I’m talking about the Monfort Bat Cave Sanctuary in Brgy. Tambo, Island Garden City of Samal. It has 5 cave openings with an estimated bat population of 1.8 million. They range from insectivorous and frugiverous (fruiting) bats like the Geoffroy’s rousette to large flying fox and the rare blood-eating bats (vampire bats) like Lesser false.

It is accessible by road via hired car. You can also ride a bus headed to Samal, the Samal Island City Express, from Magsaysay Park in Davao City – the bus crosses the strait separating Samal from Davao via a Roll-On-Roll-Off ferry. From the ferry wharf on Samal, you can commission a “habal-habal”, or a motorcycle driver, to take you to the Monfort Bat Sanctuary.

The Monfort Bat Cave in Samal Island was accorded by Guinness as the world’s largest colony of Geoffrey’s Rousette Fruit Bats or Rousetteus amplexicaudatus.

Bats are less appreciated and sometimes misunderstood creatures but they are a big help as good pollinators and source of organic fertilizer known as guano. Bats significantly reduce insect damage to plants, the reason of Davao City’s abundance in durian.

The experience of watching millions of bats like a number of stars at night was fascinating. I’ve never encountered anything like that before. It basically attacks almost all senses, the smell is strong, the sight of bats, the feel of standing forearm hairs and bats squeaking.

The Monfort Bat Sanctuary has many things to offer. It includes briefing shed, restaurant/visitors lounge, exhibit area, walkways and paths and more. It is the best avenue for visitors to learn more about bats and the important role bats play in the ecosystem. It is highly recommended for an educational field trip.

The Monfort Bat Cave is being preserved and protected by the owner herself Norma Monfort together with the support of the residence and the local government. There are seventy empty caves in the island and were traced to have been inhabited by these kind of bats.

Monfort Bat Sanctuary is planning to create artificial bat caves to accomodate some bats. The current colony exceeds the carrying capacity of the cave as large numbers of bats roost in risky locations, even on the ground which is very unusual and under large rocks on the cave floor making them very susceptible to predation by rats, crows, snakes, cats and dogs.

It has also an Adopt-a-bat-program where you can donate $25, $50, or $100. In exchange, you will be given a bat adoption certificate, a tree will be planted in your name, a plaque that will hang in the research center plus free admissions to the Monfort Bat Conservation Park, and a 5×7 photograph. $50 and $100 will receive a shirt. Proceeds will go the operational expenses and research of the park. For more info, visit batsanctuary.org. Join now!