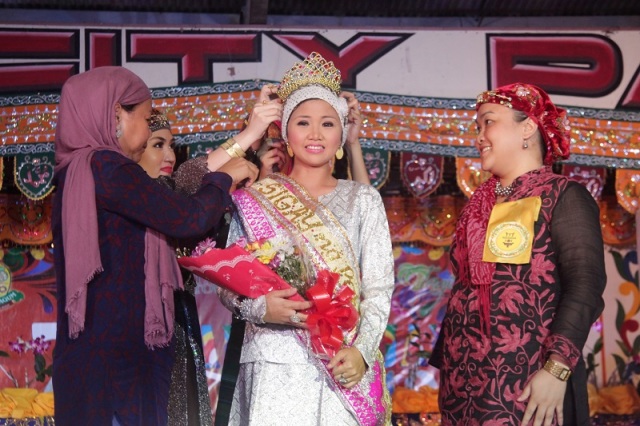 CITY OF TAGUM, DAVAO DEL NORTE – On its 7th installment, this city’s Pakaradjan Festival continues to highlight the rich culture and tradition of the Muslim Community as the search for Sigay ng Pakaradjan 2013 held last Friday, October 25, 2013 at Tagum City’s Pavilion and Cultural Center.

Sigay ng Pakaradjan is a beauty search of Muslim tribes as the highlight from Pakaradjan Festival that highlights culture and tradition of the Muslim community.

A candidate from Kagan Tribe bagged as the Sigay ng Pakaradjan 2013, she is Cherry Rose Valenzuela, emerged the fairest of them all during the coronation night.

Valenzuela’s, smart response during the question-and-answer-portion impressed the judges and contributed much to her bagging the crown.

The runners up were Hanan Baladje from Tausog Tribe, 4th runner up; Sarah Jumanding from Maranao Tribe, 3rd Runner up; Sittie Aina Cosain from Iranon Tribe, 2nd runner up and Raidyn Sinal from Maguindanao Tribe., 1st runner up. Gleiza Delgado of CIO Tagum