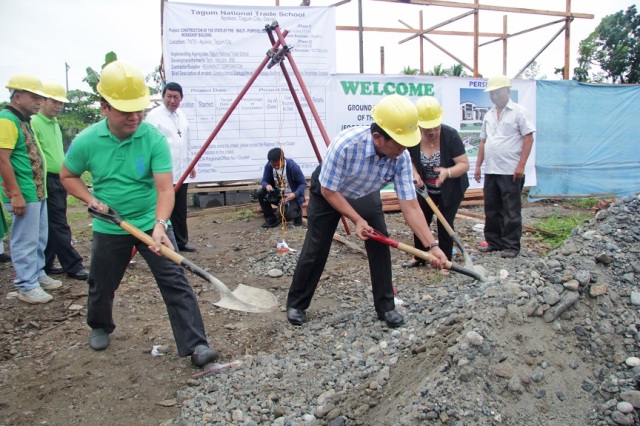 A state-of-the-art technology building will soon cater students of Tagum National Trade School, as the Department of Education and the City Government of Tagum prepares for a revitalized technical-vocational education under senior high school.

Tagum City Mayor Allan Rellon led local leaders during the ground-breaking ceremony of the said building last November 7, 2013. He was joined by DepEd personalities led Dr. Milagros Valles of the Tech-voc arm of the Department of Education’s Bureau of Secondary Education based in Manila.

The first phase of the building construction worth 4, 544, 771.51 pesos is financed by DepEd Central Office while the second phase is shouldered by the local government which is tagged at 4 million pesos.

Another 2.5 million pesos will be allocated by DepEd for the procurement of equipment that will be used for the said facility that will be fully operational before the opening of another school year.

Mayor Rellon extolled this partnership as it will better prepare the senior students and equip them with necessary skills that will be needed in the Tagum’s labor market, especially that more investments are pouring in the city now and the years to come. Louie Lapat of CIO Tagum