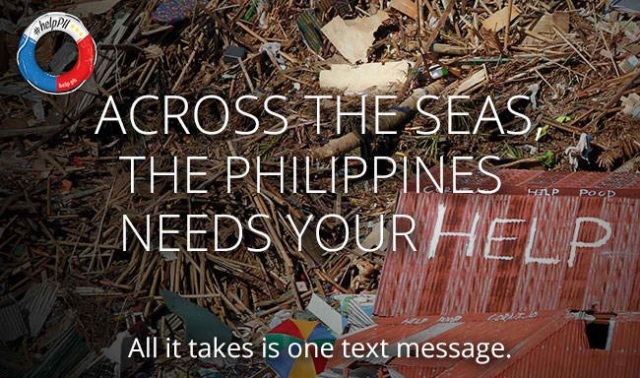 HelpPH, global donation campaign for relief, reconstruction and rehab has been launched. Mobile phone users all over the world can donate via text for relief, shelter, continuing education, livelihood programs.

In response to the needs of communities devastated by Super Typhoon Haiyan/ Yolanda in the Philippines, the Philippine Disaster Recovery Foundation (PDRF) has launched HelpPh, a global campaign for donations via mobile load to help fund programs for relief and reconstruction in partnership with international organizations, Philippine NGOs, government agencies and private companies.

Mobile phone users from over 40 countries can now directly donate to HelpPh by sending airtime load to PDRF through BayadLoad, a mobile money service of Smart Communications, Inc. (Smart) approved by the Bangko Sentral ng Pilipinas (the Philippine Central Bank) for this purpose. 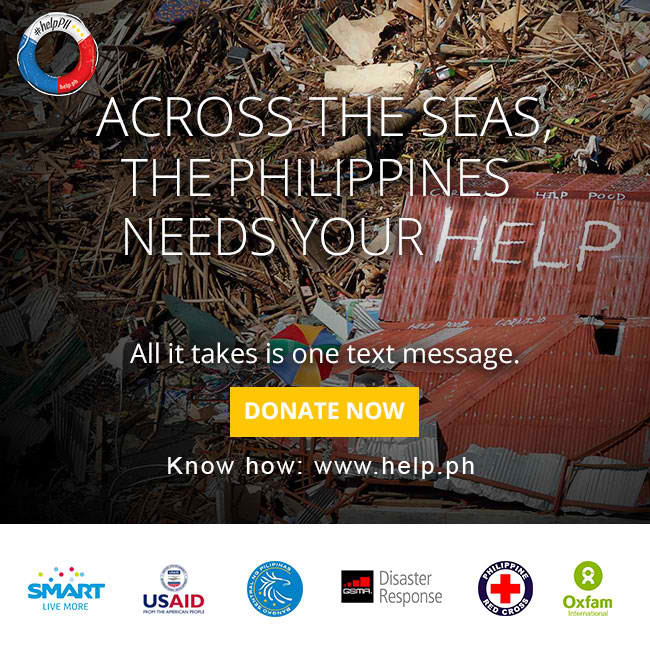 To contribute to HelpPh, mobile phone subscribers overseas must key-in +63-999-7-000-000 (12-digits) as the beneficiary mobile number and then send their donation using the airtime top-up procedure of their specific mobile network operator. The maximum amount per day is US$10. This fund-raising program will continue until December 31, 2013.

“The unprecedented scale of the devastation inflicted by Typhoon Haiyan/Yolanda requires a global response. Through HelpPh, we are providing people all over the world the means to send help to those in greatest need through a few clicks on their mobile phones,” said PDRF chairman Manuel V. Pangilinan.

The United Nations recently initiated a global effort to raise US$310 million for the Philippines in the aftermath of Typhoon Haiyan/Yolanda. One proven channel for international donations is through mobile phones.

According to a CNN Money report, a donation via text campaign raised US$25 million four days after Japan was hit by a massive earthquake and tsunami in March 2011, while a donation drive for the victims in the 2010 Haiti earthquake generated over US$150 Million.

Through Philippine and international partners, funds gathered will be directly channeled to immediate relief efforts and later, to long-term recovery programs in areas of the greatest need.

For this purpose, PDRF is firming up cooperative arrangements with organizations like the Philippine Red Cross, the United Nations Development Programme (UNDP), Caritas Manila, Philippine Business for Social Progress, Gawad Kalinga, the United States Agency for International Development and the GSMA, the global association of the mobile phone industry.

Immediate relief operations will be prioritized for remote areas not reached by mainstream relief distribution. Corporate members will be tapped to provide transport, logistics and communications support to enabletimely coordination of relief efforts by government and relief agencies.

This includes “information as relief” to provide affected communities with news and information through mobile phones, the Internet, social media and satellite TV, as well as medical relief through on-the-ground missions, telemedicine and psycho-social therapy.

For shelter and resettlement, PDRF will work with various partners including Gawad Kalinga, Habitat for Humanity, One MERALCO Foundation and Philippine Contractors Association (PCA).

To provide education for displaced school children, PDRF will help implement innovative learning programs, including mobile learningsystems, in cooperation with the Department of Education, the Central Visayas Institute Foundation and the GSMA.

Meanwhile, the microfinance sector will be tapped to help create sustainable livelihood that would give affected families a chance to start anew. Initial partners are the Philippine Business for Social Progress, ASA Philippines, CARD MRI, Microcredit Council of the Philippines and Land Bank of the Philippines. PDRF is also holding discussions with the United Nations-International Labor Organization and Oxfam to pursue collaborative efforts in these areas.

Through its mobile money subsidiary, Smart has partnered with four leading global mobile airtime transfer companies that include Transfer To, Tranglo, www.ezetop.com, and Aryty, which together cover more than 250 partner mobile network operators in 90 countries, serving 5.9 billion mobile subscribers, 60 percent of whom, or about 3.6 billion, are prepaid users.

PDRF was organized in 2009 following the devastation caused by Typhoon Ketsana/Ondoy and is made up of major private sector companies and leading NGOs.

It is one of the three identified institutional conduits approved by the Bangko Sentral ng Pilipinas (Central Bank of the Philippines) together with the Department of Social Welfare and Development and the Philippine Red Cross. To learn more about this, please visit help.ph.