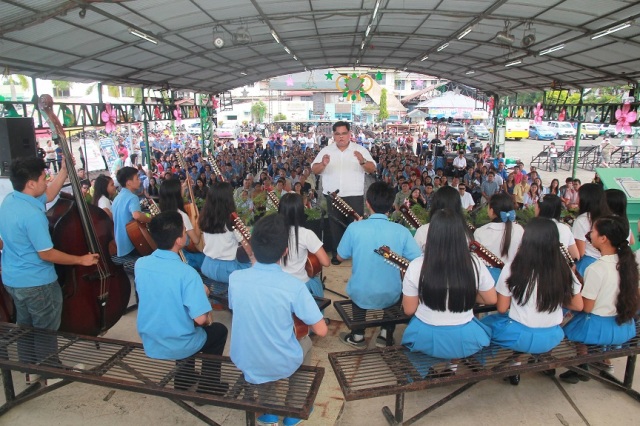 Another Tagumpay for Tagum!

The City of Tagum cemented its claim as the premier Music Capital of the South and the training-ground of future musicians with the twin victory of two Tagum-based school rondalla groups in the National Music Competition for Young Artists (NAMCYA) held at the Cultural Center of the Philippines in Manila last November 22, 2013.

The Tagum City National High School Rondalla bested 12 other rondalla groups across the country with its historic clinch of the championship prize in NAMCYA’s rondalla category. The 20-member group is trained by two-time NAMCYA-qualifying Marlon Saga.

Mayor Allan L. Rellon led local government leaders in paying tribute to the team who gave pride and honor not only to Tagum City but for the entire Davao Region.

Cash incentives were given to the two groups during the LGU’s monthly convocation program last December 2, 2013.

Saga, in an interview with the City Information Office, extended their group’s appreciation to the local government for all its support, which he acknowledged as one of the ingredients of their success.

In its website, the Cultural Center of the Philippines said “NAMCYA has been a principal instrument in discovering major music talents from all over the country whose projects involved countless musicians, trainers and administrators, all serving in the difficult but fulfilling process of selecting the best artists from all seventeen regions of the nation annually.”