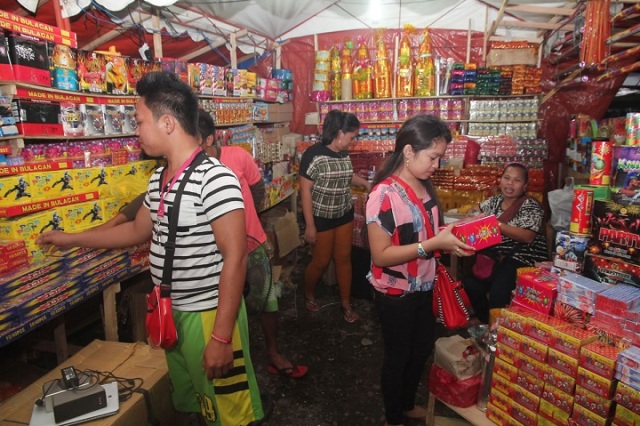 CITY OF TAGUM, DAVAO DEL NORTE—A night filled with music and merry-making from a long list of Tagumeño performers will drum up this city’s exciting celebration welcoming the year 2014 and will be top-billed by the highly-anticipated Grand Fireworks Display.

Mayor Allan L. Rellon announced this in the sidelines of the formal launching of the firecrackers display and selling area along National Highway in Libertad, Barangay Canocotan, this city.

Tagum’s grand fireworks display has become an annual tradition in the city, drawing audience not only from Tagum City but also from other parts of Davao Region.

Mayor Rellon shared this year’s fireworks display will be moved from the national highway to a new site in JV Ayala Avenue, where the new city hall stands, to accommodate more people who wish to witness this year’s illumination of the sky.

The local government earmarked a budget of 400 thousand pesos for the event, which the mayor said will be an appropriate kick-off for better year 2014 for the city.

He added that they chose the new city hall as this year’s venue as a way of letting the public know that the local government will commence the construction to finish the iconic government building of the city.

“It’s also a way of driving away bad spirits in the area,” he said.

The mayor announced this during the launching of firecrackers display and selling area which is moved from Rotary Park Open Grounds in downtown area to a more open-spaced government-owned area in Barangay Canocotan.

48 stalls are selling firecrackers that are authorized by Republic Act 7183, the law that regulates the sale, manufacture, distribution and use of firecrackers and other pyrotechnic devices.

Grace Terante, OIC Economic Enterprise Manager of the City, said the area will be enforced with a 24-hour security team to ensure the safety of both the businessmen and the buyers.

The businessmen will be allowed to sell their products until January 1next year. | Louie Lapat of CIO Tagum