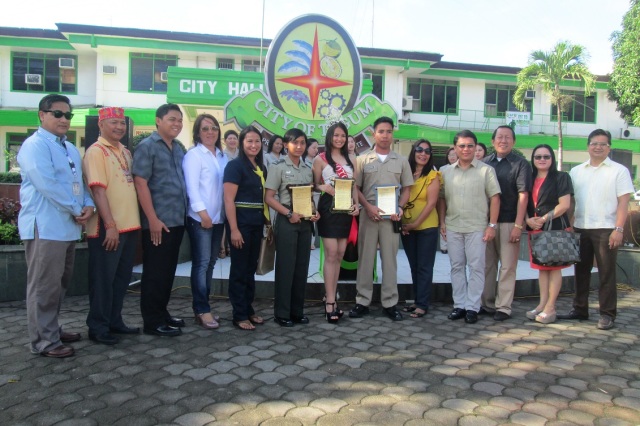 TAGUM CITY—The City Government of Tagum on Monday recognized two Tagumeños who graduated recently in the Philippine Military Academy, the premier military institution of the country and is the training ground for future officers of the Armed Forces of the Philippines.

Mayor Rellon said their example is a shining beacon of inspiration for the Tagumeño youth and their perseverance and hard work is worthy of emulation. The two were officially presented a plaque inscribing the full text of the Sangguaniang Panlungsod resolution, which commended their achievement.

Forrosuelo, a graduate of St. Mary’s College of Tagum High School Department, is making history as the first child of a Medal of Valor Awardee—the highest military award given to the members of the Armed Forces of the Philippines—to graduate from PMA.

“Expectations were high and the pressure is even greater because they think of me as someone as strong and brave as my father,” the newly commissioned 2nd Lt. Forrosuelo told the Philippine News Agency.

Jewel was only eight years old then, thus not fully understanding what was happening back then and only felt the impact of her father’s death in the years that came by.

“The thought of my father’s sacrifice not only for our family, but for the whole nation uplift me and provided me the motivation to carry on,” she added.

She is among the nine female members of PMA Siklab-Diwa Class of 2014 who joined the Army.

On the other hand, Ensign Miranda is a graduate of Tagum City National Comprehensive High School (he graduated salutatorian in 2006) and a College Graduate student of University of Mindanao Tagum College before entering the PMA.

Ensign Miranda, a son of a public school teacher and a businessman, will be serving under the Philippine Navy.

It is an annual beauty contest participated by different universities across the country, which advocates Reserve Officers’ Training Corps (ROTC) Program to the youth as a necessary component in nation-building.  | Louie Lapat of CIO Tagum