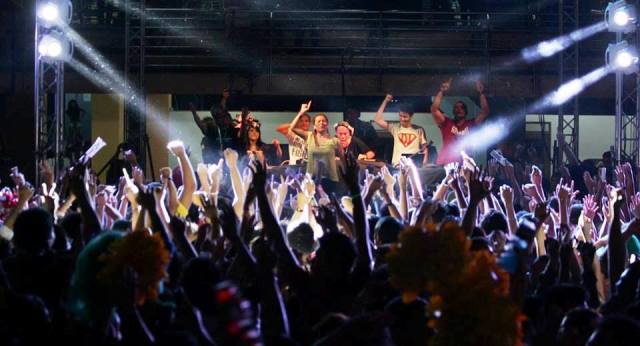 This morning while we are browsing for some trending topics in Davao, me and my team bumped into a very interesting post by Kat Dalisay in Facebook, this post is related to the recent issue about the upcoming rave party in August by Manic Nightnings Productions. Read the full speech below and don’t forget to watch the short video at the end.

The honorable Mayor Rodrigo Duteterte,… //The honorable Vice Mayor Paolo Duterte… //Honorable members of the Davao City Council, Good morning! //First, I would like to apologize for the Facebook statuses I posted a week ago. I am really sorry for my conduct. I own up to my lack of judgment and will offer no further explanation and justification for my Facebook posts.
Those actions were costly mistakes on my part and are hard lessons to be learned and have been learned.
I humbly submit to this august body for any actions or recommendations brought about by my conduct.
Again, I am sorry. //
Ever since Manic Nightnings Productions started, our company’s goal is for Davao to be known worldwide as a tourist destination and educate people about music and culture. //
I love going to parties. It is my form of leisure. The exposure to the party scenes in the different places that I have been to opened up my eyes to the potentials of event organizing or event production as a business and as a unique tool for marketing and for advocacy. /
Last year, I ventured into the business of organizing events and parties by coming up with Carte Blanche held at the Crocodile Park Concert Grounds. /
Carte Blanche was a carnival-themed party complete with magicians, jugglers, cotton-candy booths, acrobats and many more. //
I really wanted Dabawenyos to experience a different kind of an event never before seen in the city – a themed party. //
Because I was new in the business and in the events scene at that time, I teamed up with another events organizer, Jommel Bañez of Party Animal, to turn Carte Blanche into a reality. /
Having had experience in handling parties and other events, Party Animal, took care of the requirements and documents needed. As you can see in my first two special mayor’s permits, Mr. Bañez is the signatory. /
Unfortunately, the partnership with Party Animal ended on a sour note because of irreconcilable differences and my loss of confidence in him. //

Regarding the Allegations /
1) We paid all our taxes. The City Treasurer’s Office already cleared that last Wednesday during the council meeting. There may have been lapses on the first permit application but was duly complied upon after the event. //

2) Security was present. We had 55 bouncers, 3 Talomo Police units, 25 police personnel inside and outside the event area. Bomb sniffing K9 units went through the entire venue before it was opened to the public and were also on standby during the event.
Additionally, we made sure that first aid units were on standby as well together with an ambulance and a fire truck. Finally, personnel from Task Force Davao were present to augment whatever security forces that were already in place.
Everyone who entered the event area was asked to surrender any sharp objects, cigarettes and lighters that they had in their pockets or in their bags or purses. Body frisking was employed in all entrances to the event area.
This security plan was the same, and, in fact, reinforced during the events that followed Carte Blanche. //

3) Liquor ban. During Carte Blanche the “unlimited drinks” ran out as early as 9 in the evening. Our sponsor-vendors controlled all sales of drinks and did not serve to minors. //

4) No smoking. This was also enforced during all of our events. Cigarettes and lighters were surrendered upon entering the event area. Bouncers and police personnel were inside and outside the event area and made sure that there were no violators. //

5) Admission of minors. During Liberalia last March, we had special wristbands that we required all minors to wear for easy identification and to ensure that they will not be served any alcoholic drinks. //

6) Vulgarity of outfits. Manic Nightnings staff members, of which I am responsible for, wore our white Carte Blanche shirt as uniform. Our guest performers fire dancers, drag queens, clowns and Las Vegas show girls, however, wore costumes to keep to the carnival theme of Carte Blanche. //

//
Use of the word “Kadayawan” and permit.
I was not aware, and failed to make myself aware, that there is an existing regulation or policy when using the word “Kadayawan” in an event name. And for that, I apologize.
If our application for the permit will be granted, we will obediently comply with all the necessary fees to be paid to be able to use the name. If not, we are also open to changing our event’s title. //

“Private Property”
I did not state in our application to excuse myself or deny any security measures from the government. In fact, we openly seek and ask for the support on security from our police force and Task Force Davao to augment and reinforce the measures that we have already in place to ensure the peace and order during all of our events. //

Drugs
There was no selling of drugs during all of my events that I was aware of. I do not and will not tolerate this! There were enough police personnel and bouncers roaming around to make sure this will not happen. All the attendees were not allowed to bring big bags inside the event area and were required to go through body frisking at all of the entry points. //

I am not here to change any ordinances or fight anyone. I am not asking for premium treatment in relation to any of our city’s ordinances. I am here asking for your support and an opportunity to work with the government; to help encourage tourists to visit our city, most especially during the Kadayawan season. //
This event is not just for myself but for the city as well. /
My vision for this business was to let people around the country, and also across the globe, know that there is an event like this here in Davao. That they can come here and have fun. That it is safe here. //
In fact, these types of events and parties are also being replicated and hosted by other local government units. /
Last April, Mati City hosted Summerfrolic to promote Dahican Beach. /
And just this June, the provincial government of Davao del Sur asked Manic Nightnings Productions to stage a themed party in Digos City – Festique. /
We have also been approached by several local government units to plan and execute events or parties similar to what we have already done here in Davao City. //

Our events are more than just parties. They are a synergy of creativity. A showcase of our city’s talents and skills and a stimulus for business and tourism.
A synergy of creativity since we get the best DJs from Manila, Boracay, Cebu, Bacolod and also from Davao. We also tap into the creative geniuses of Dabawenyos particularly graphics and performance artists to create visualizations for the attendees and leave an unforgettable experience for those who were there.
An experience that will reverberate and be talked about across this country.
Our events also provided opportunities for ancillary businesses like food and beverage enterprises, lights and sounds companies, taxi operators, DJs, stage performers, venue owners, advertising companies and many others.
Manic Nightnings Productions have also contributed a lot for our tourism industry.
– we were known all over the philippines for bringing one of the first 3d mapping party. which happened last january at the abreeza ayala mall, park and din area. this event was free and was attended by parents, kids and our youth.
– we were the first in davao city to incorporate earth elements to a party.. fire, water, wind and music. this happened last february at the sm lanang premier fountain court.
-we were also recognized for bring in a new themed earth hour party with drum beaters and uv paints. which was last march at the sm lanang premier fountain court.
-we were recognized in Europe which where we got the universorobot, and in the philippines for bringing in an international artist in Davao city. this happened last march, during Liberalia 2014. a partnership with smart prepaid.
-Davao events were featured in different travel and events magazine in the philippines. travel magazine, circuit magazine, zee lifestyle, and, mlife and living in mindanao had very good reviews about our events.
-davao city was also recognized for being the first to bring in a heavy line upof the best djs from all around the philippines and having a massive event turn out.
-carte blanche changed the views of other filipinos from manila, cebu and other cities that we have a quality entertainment scene, and got them interested to visit and invest on our city.
-edm festivals which manic nightnings produced opened the doors to our youth and educated them about music and culture.
-the events that we produced made a strong bond with our youth, giving them outlet and time to exercise their freedom of expression with in the city’s regulations.
-we are here to promote peace, love, and music. nothing else but that.
//
After Vice-Mayor Duterte raised the issue regarding my Facebook post, I realized I made a very grave mistake. A mistake that will haunt me for the rest of my life. I should have been more prudent in my actions. I know better now because of that experience.
I have always loved and will always love Davao. I always had great admiration and respect for the city government and its leaders. And I am a big fan of our city mayor.
Unfortunately, when I made that post on Facebook, I sorely missed the essential legacy and leadership of our local government leaders — that the peace and progress we are enjoying right now is a product of our firm obedience to the laws and policies of our national and city government. //

My dream, as simple and elementary as you might find it, is to promote Davao as a destination for people who love to party, to tell the world that, truly, life is here. //
The realization of that dream is within the hands of this august body. I humbly submit to whatever decisions the council will render.
And if the city council will decide to give me another chance I, together with my team, are very willing to cooperate with the local government in holding the event.
bear with me for a few more minutes, i would like to show you a short video presentation that my team and i have prepared.
Maraming, Maraming salamat po sa maikling panahon na ibinigay nyo sa akin ngayong umaga.
Maayong buntag kaninyong tanan.