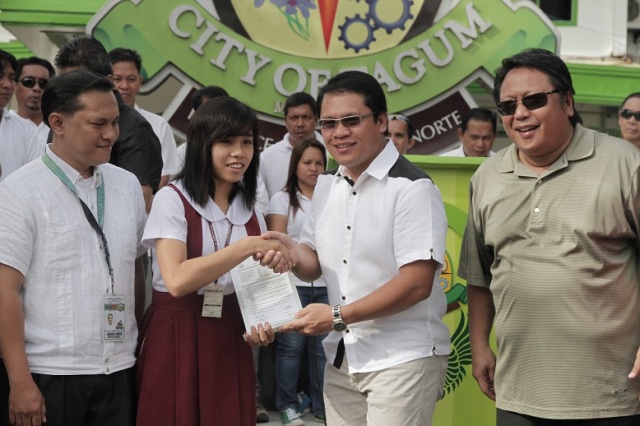 Mayor Allan L. Rellon, along with the members of the 6th City Council of Tagum, formally paid tribute to a young Tagumenyo athlete in the name of Ms. Lea Lesly M. Buates for having brought honor and pride to City of Tagum for winning medals in four National Games in the sport of Taekwondo for School Year 2013-2014.

Lea Lesley M. Buates, 15 years old, a resident of 176 Teacher’s Village, Barangay Magugpo South, Tagum City, is the daughter of Mrs. Sonia Mendoza-Buates and Dr. Leo V. Buates. She started her venture in Taekwondo at the age of 9 through the guidance of his coach Mr. Abraham Moreno. Aside from the 4 national achievements, she already collected 30 gold medals, 17 silver medals and 6 bronze medals in her Mindanao League Competitions.

With her accomplishments in the world of sports demonstrate in the entire community the importance of physical fitness and a healthy lifestyle, the City Government of Tagum through the6th City Council of Tagum passed a resolution inscribed in a plaque commending her for having brought honor and pride to Tagum City for winning medals in four national games in the sport of taekwondo for school year 2013 – 2014. / Edwin B. Lasquite of CIO Tagum