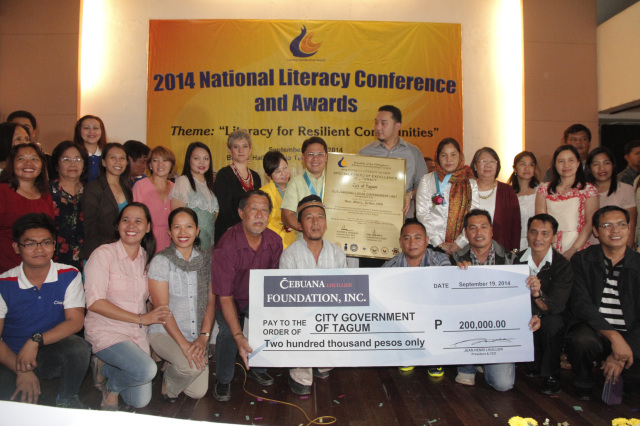 Tagum City under the leadership of Mayor Allan Rellon added another feather on its cap by winning the 2014 Special Award of Excellence in Literacy for sustaining and improving its literacy programs. Photo by Kareen Jane Gomez

TAGUM CITY—The improvement and sustainability of this city’s literacy programs added a substantial push for the City Government of Tagum to clinch the Special Award of Excellence in Literacy which was formally accorded in a fitting ceremony in Baguio City last September 19, 2014 in time for the 2014 National Literacy Conference and Awards.

In his acceptance speech delivered to local government leaders and literacy stakeholders from the different parts of the country, Mayor Allan L. Rellon highlighted the strategic multi-sectoral partnership being practiced in the city that served as an ingredient for the successful implementation of the city’s literacy programs.

“This award is a product of years of passionate implementation, of hits and misses, and of constant evolution being stimulated by brilliant minds back home,” Mayor Rellon said.

The local chief executive also stressed that the city’s literacy programs have equipped the Tagumenyos with the necessary skills “to not only rise up from a life of poverty and discrimination through their own creativity and capacities but also to participate more in formal community organizations and to contribute for the betterment of the society.”

The Special Award of Excellence in Literacy is considered to be the Philippines’ highest award in the field of literacy which is awarded by the National Literacy Coordinating Council created through Republic Act 7165 and whose members came from Department of Education, Department of the Interior and Local Government, Senate of the Philippines, House of Representatives, National Economic and Development Authority and the Philippine Information Agency.

Aside from the official marker awarded to Tagum, the city also received 200,000 pesos cash prize courtesy of the Cebuana Lhuillier Foundation, Inc., the official partner of DepEd.

The Special Award of Excellence in Literacy is the latest addition to the long list of literacy awards garnered by the city, the last of which is its historic win of the UNESCO King Sejong International Literacy Prize and the Hall of Fame Award back in 2011.

For this year, the City Government packaged its bid through EAGLE WINGS Program, the 10-point development thrusts of the Rellon administration where each thrust is infused with literacy programs. | Louie Lapat of CIO Tagum