Davao City has been ranked as the 9th safest city in the world. After a few months it became the 4th, and recently reached the top spot on Numbeo. All these good reviews are credited to the city’s well-respected leader and highly feared by large and small-scale criminals, Hon. Mayor Rodrigo “Digong” Duterte. He has the reputation of an “iron fist” leader, and sometimes referred to as the “dictator” in executing the law. He fearlessly conveys his thoughts with strong words to those who oppose him. Despite his character, Mayor Duterte has also shown his lighter side to most people; which made them respect and adore him more. 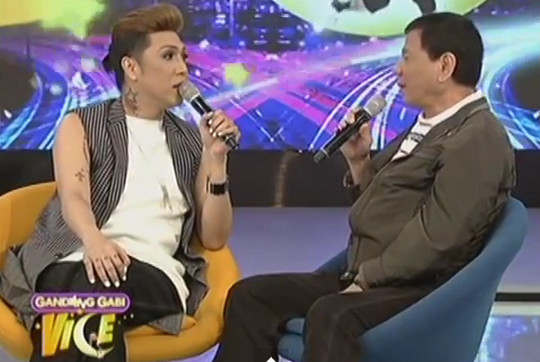 Last July 8, 2015 our honorable Mayor was invited to guest in the country’s top comedy talk show – Gandang Gabi Vice, hosted by the most sought-after, multitalented comedian, Vice Ganda. The awaited appearance finally aired on the night of July 12, Sunday. That very hour the entire Davao and the rest of the nation were glued to the tube as if they are watching a Manny Pacquiao fight. As Vice Ganda introduced, it was the most requested among his supporters to have Mayor Duterte in his show. As he entered the stage, he showed an overwhelming energy and enthusiasm, and candidly answered no-holds-barred questions thrown by Vice. The entire viewing experience was hilariously entertaining, especially when the mayor talked about having divorced with his first wife, whom he had his children with; and three other girlfriends. What made it funnier was that he said he could add Vice Ganda in his list! Another amusing part was when Mayor said that he used to be gay in his younger years. When Vice Ganda asked him about it, he revealed that he just did that to get close to the girls he liked.

One of the funny moments during the interview was when Vice Ganda asked Mayor Duterte about the number of people he had killed and brought in the funeral parlor. He simply said, “Bakit ako magdadala, eh may pulis naman na magdadala?” (Why would I bring them myself when we have the police to do that?). The “hugot moment” where he said, “You only live once but you die several times through heartbreaks,” had lead the conversation to the antics of the mayor; talking about the host’s rumored basketball boyfriend, putting Vice Ganda on the hot seat.

Aside from the memorable parts of the entire guesting, Mayor Duterte also talked about his views on same sex marriage. He said that ever since he was in college, he would always speak up when a gay was being bullied at school or at his dorm because he always hated oppression. Vice Ganda also asked whether he would still accept his son if he was a gay. Without any doubts, he sincerely answered that he would wholeheartedly accept him. Duterte said, “It’s more of the human dignity than anything else. All human beings are created by God. So rerespetuhin mo yung totoong babae o lalaki. At kung ito namang isa ay medyo alanganin… then he is also a creation of God”. “Mag-respetuhan tayo. Sa Davao walang binabastos na bading,” he then added. 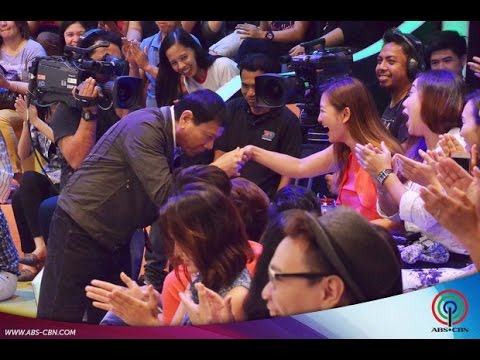 The mayor has been a supporter of the LGBT community. Sighting that in 2009, he was one of the people who condemned Commission on Elections when it rejected LadLad Party List to participate in the national elections. In Davao City, Duterte also approved an ordinance that will hold someone criminally liable if proven discriminating a gay or anyone in the minority groups. 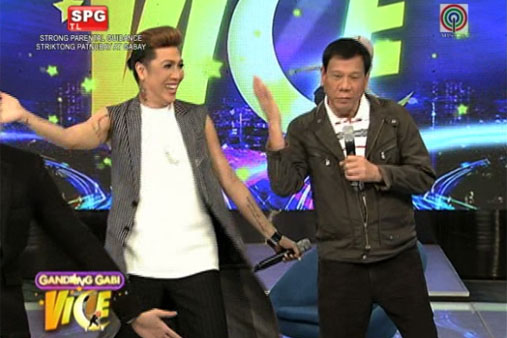 Vice Ganda also highlighted how game our good mayor was by making him sing his favorite song, were Duterte serenaded a beautiful lady in the audience. He even agreed to dance the popular hits, “Nae Nae” and “Twerk It Like Miley.” His moves turned the serious atmosphere into laughter, and entertained the live audiences and the viewers. Lastly, Mayor Duterte’s last statement made it clear that he has a heart and that his intention is purely to serve his people by these words, “I want my city peaceful because that is what I’m paid for, to enforce the law and make the city livable.” 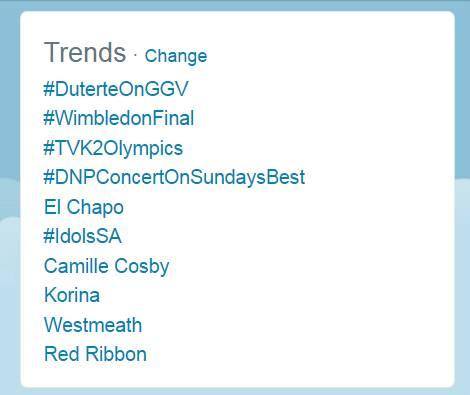 At the end of the evening, the #DuterteOnGGV took the top place as the most trending news in the Philippines and in the world on July 12.