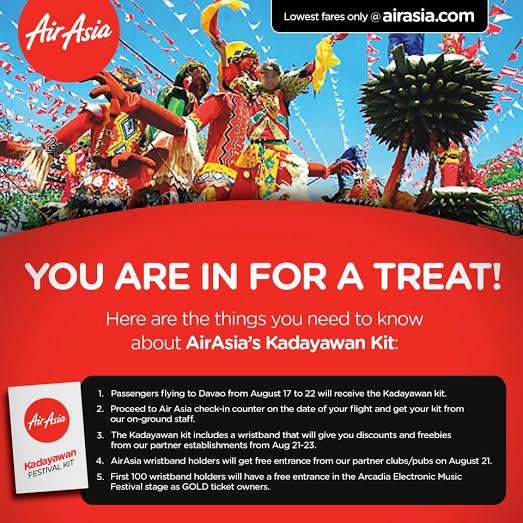 MANILA, 18 August 2015 – AirAsia, the world’s best low cost carrier for seven consecutive years, is giving away free concert passes, discount treats and other exciting freebies in line with this year’s celebration of Kadayawan Festival in Davao City. Starting today until 22 August 2015, all AirAsia passengers bound for Davao from Manila and Cebu will each receive a festival kit which provides them free and exclusive access to festival concerts of hottest local artists such as Up Dharma Down and Techy Romantics in SM Lanang, including passes to Arcadia Electronic Music Festival in D’Leonor Resort.

The AirAsia festival kit also comes with useful information about Davao and its celebrated Kadayawan Festival. Foodies and partygoers will also enjoy discounted prices at participating restaurants and clubs all over Davao City just by showing their AirAsia festival kit wristbands.

AirAsia flies to Davao from Manila with 3x flights daily. Promo fares to/from Davao and other AirAsia destinations from the Philippines are also up for grabs now at www.airasia.com with all-in fares from as low as P859 only. The promotional fares are also available on AirAsia mobile Application that can be downloaded via iPhone and Android, and at mobile.airasia.com.

For more updates on AirAsia Philippines and its latest promotions and activities, follow them on social media through Facebook(facebook.com/AirAsiaPhilippines) and Twitter (twitter.com/AirAsiaPh).