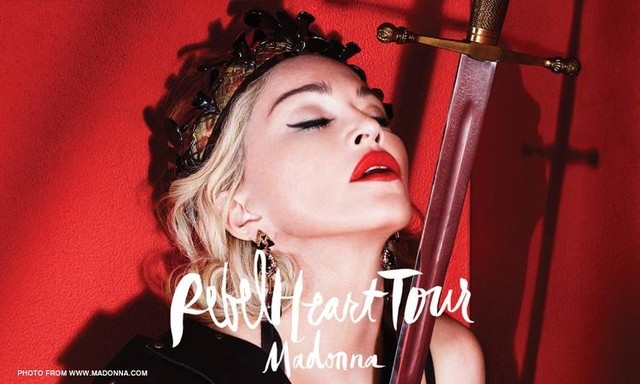 Get ready for the biggest music experience of your life as the country’s number 1 mobile brand Globe Telecom presents Madonna’s Rebel Heart Tour in Manila at the SM Mall of Asia Arena on February 24 and 25, 2016.

The Pop Queen and everybody’s “Material Girl”, who is visiting the country for the very first time, is expected to captivate her Filipino fans with her heart-pumping performance and signature hits that span across many generations. Her constant reinvention of herself has endeared her to millions of fans worldwide regardless of age, gender, and geographic location.

“Together with millions of Filipinos who are ecstatic about Madonna’s first trip to the Philippines for the country’s biggest musical spectacle to date, Globe is very excited to celebrate this big entertainment milestone that will surely be the talk of the town for many years. Bringing a global music icon and superstar closer to her fans is part of our commitment to make music an integral part of the Filipino lifestyle,” shares Globe Telecom Senior Vice President for Consumer Mobile Marketing Issa Cabreira.

As the lone presentor of the concert, Globe held an exclusive ticket pre-sale to its customers for 2 days last July 24 and August 1, 2015 to give them first dibs to reserve and purchase tickets, which expectedly sold out in a matter of hours.

A series of teaser videos uploaded on Rollingstone.com gave fans a behind-the-scenes sneak peek into the rehearsals of the six-month-long tour. The videos showcased the different costumes, routines, production set-up, props, and dance moves that will go into each show.

In her recent Rolling Stone cover story, Madonna shared just how involved she is in every aspect of her concerts. “I’ve always been that way, and then it’s just developed over the years, as I’ve done more things,” she explains. “I really want to see everything. If it’s around me and it’s part of my show, I need to be a part of all of it. From the creation of the music, to the surface of the floor, to everyone’s hairstyle, to the details with the buttons and the bows and the snaps and the zippers. All of those things!” she says.

In another article by wwd.com, Madonna revealed the top designers she will work with for the tour. According to the article, Madonna has enlisted the world’s top designers, most famously Jean Paul Gaultier, to collaborate on the costumes. She revealed exclusively to WWD the designers who made the cut, which includes Jeremy Scott and Alexander Wang. Gucci creative director Alessandro Michele also pitched in.

In terms of setlist, wwd.com also said that “Vogue” and “Holiday” will make appearances on the tour, just like Madonna’s teasers on her Instagram account.  She has also been posting snippets of looks she’s been working on with her longtime costume designer, Academy Award-nominated Ariane Phillips.

Early this year, the seven-time Grammy Award-winner released her 14-track album Rebel Heart with hit singles “Bitch, I’m Madonna”, “Living for Love”, and “Ghosttown”, to name a few. With household hits such as “Like a Virgin”, “Papa Don’t Preach”, “Vogue”, and “Like a Prayer” among others, Madonna’s musical career has already breached over 3 decades. She has sold more than 300 million records globally and has recently marked a new world record by being the only artist to have 45 number one songs on any chart in Billboard history.

The Rebel Heart Tour is the 10th worldwide concert tour by Madonna in support of her 13th studio album, Rebel Heart. It will kick off on September 2015 in Montreal, Canada and continue throughout North America, Europe and Asia, finally concluding on March 2016 in Australia.

Madonna’s Rebel Heart Tour in Manila is produced by Live Nation Global Touring and MMILive and is presented by Globe Telecom.