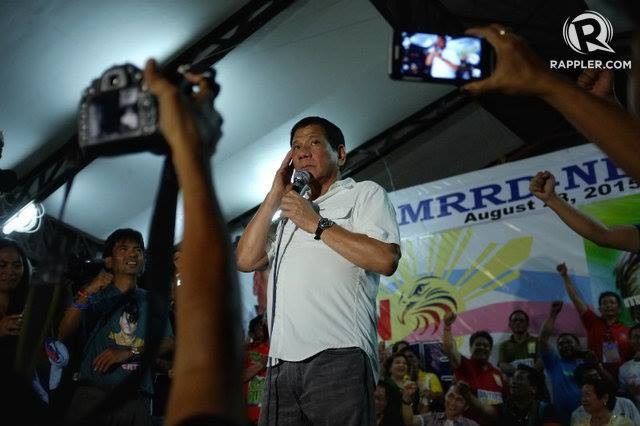 The chosen date for the long-awaited proclamation happens to be a national holiday to honour one of the country’s revolutionary heroes who fought the highly-centralised Spanish government in the 1890s, Andres Bonifacio.

Duterte, who almost missed out on the chance to run for President after he opted to file a Certificate of Candidacy (COC) for Mayor of Davao City, finally decided to withdraw his COC for Mayor on Friday to heed the call of the people to lead the country.

He takes the place of PDP Laban presidential candidate Martin Diño, the party’s Deputy Secretary General, who filed a COC for President on Oct. 16 when Duterte failed to arrive at the Comelec office in Manila.

Diño has since withdrawn and officially named Duterte as his substitute.

The Monday proclamation was confirmed by Duterte’s trusted lieutenant, Christopher Lawrence Go in a text message sent to members of the Duterte core group of supporters.

A simple backdrop made out of a tarpaulin proclaiming “Sama-sama Tayo Sa Tunay na Pagbabago” will adorn the stage when Duterte is officially proclaimed.

Duterte, who dislikes lavish and extravagant political activities, filed his COC for President on Friday through a representative, lawyer Salvador Medialdia, at the Comelec Law Department in Manila.

A little later, his daughter, former City Mayor Sara Duterte-Carpio, filed a COC for Mayor to substitute her father.

There will be no flair and no fancy activities on Monday.

Only two people are expected to talk – PDP Chairman Senator Aquilino Pimentel III and Duterte himself.

Expected to attend the proclamation are key PDP Laban leaders, including its chairman emeritus, former Senator Aquilino “Nene” Pimentel Jr., and heads of various Duterte support groups who continued to urge the mayor to run for President even way past the Oct. 16 deadline.

On the eve of the proclamation, Nov. 29, musicians and artists who formed themselves into a group called MAD (Musicians and Artists for Duterte) for Change will hold a huge musical concert on Mckinley Road in the Bonifacio Global City (BGC) in Taguig, Metro Manila.

The concert will start withat 4 p.m. with free haircut, actually head-shaving, and short speeches by key leaders of the movement to support Duterte’s Presidency.