Kadayawan is an annual Festival in the City of Davao, Philippines. It was originated from the friendly greeting “Madayaw” which means good, valuable, superior and beautiful. It is a celebration of life, a thanksgiving of what the nature gives us such as bounties of harvest and serenity of living. It’s a long-week celebration of smiles, yells and cheers to the different events we will witness.

The Festival will begin with the Photo Exhibit on August 15 at 2pm in Durian Dome Peoples Park. This will showcase the amusing photos about the beauty of life here in Davao City. Next, is a Thanksgiving Mass at 3pm and Opening Ceremony at 4pm in Great Lawn Peoples Park. 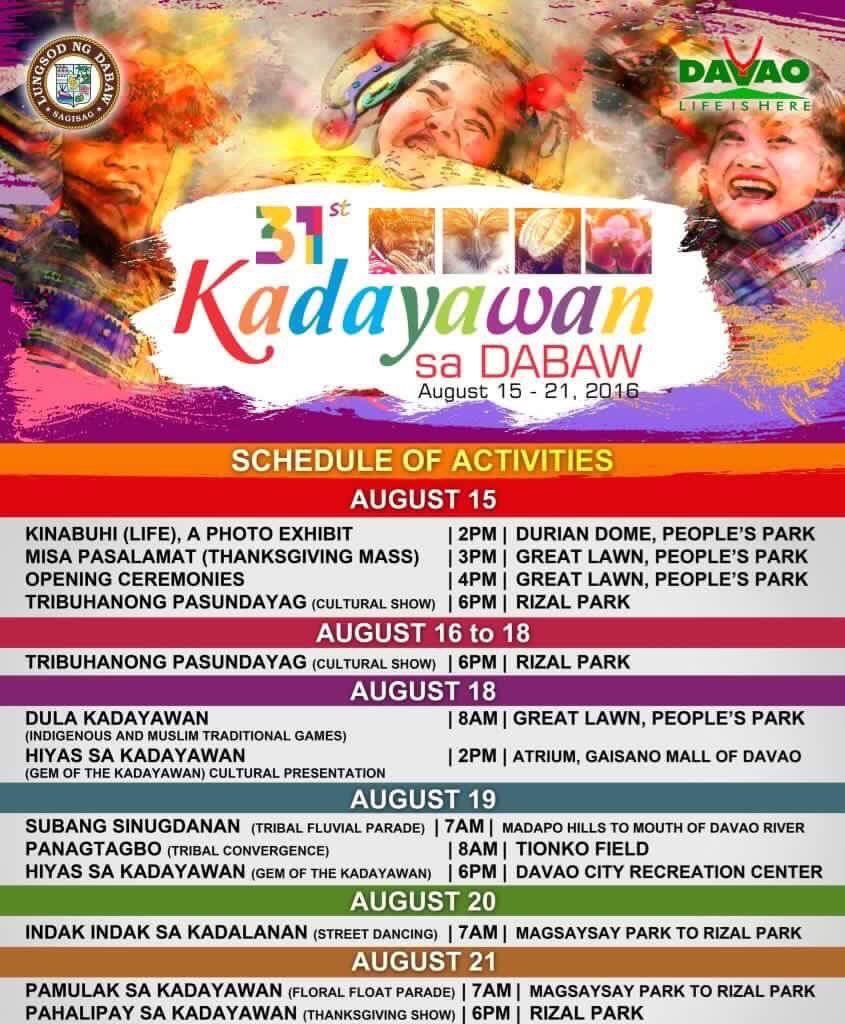 On the 16th to the 18 of August of the Festival we will witness the Cultural Show at 6pm in Rizal Park which expresses the pride of Davao’s different culture and at 8am of 18th we’ll have the Dula Kadayawan it is an Indigenous and Muslim Traditional games which will be held in Great Lawn Peoples Park.

The Gem of Kadayawan which is the Hiyas ng Kadayawan will begin at 2pm in Atrium, Gaisano Mall of Davao. This event is a pageant search of distinctive indigenous young lady who is talented, beautiful and knowledgeable of her own native culture. On that day, candidates will show their unique and different cultural presentations.

And there’s more! On the 19th of August the Tribal Fluvial Parade or termed as Sugbang Sinugdanan a must-see event will starts at 7am in Madapo Hills to Mouth of Davao River. This is a parade that will show us the stunning, colorful and creative floats of distinctive ethnic tribes. At 8am Tribal Convergence will start and Hiyas ng Kadayawan continuation 6pm in Davao City Recreational Center.

Another must-see event is Indak-indak sa Kadalanan on August 20. This is also a Gem of Kadayawan and a street dancing that will begin in Magsaysay Park going to Rizal Park at 7am onward. The streets will be alive with thousands of stunning colors from the graceful dancers who are splendid and their glorious costumes and props. This competition showcases local talents whose dancing prowess will make you dance to the beat of their ethnic-inspired music. It’s a day of smiles and cheers. Never miss it!

August 21 the last day of Kadayawan Festival will save its best. At 7am in Magsaysay Park “Floral Float Parade” or Pamulak sa Kadayawan will happen and this will bring us to a high level of joy and pride, introducing a very colorful parade of majestic floral floats. It was designed to unleash the beauty of flowers and abundance of vegetation that grows across the City of Davao. The parade offers a wide arrange of amusing and stunning intricate craftsmanship designs.

And to end the festival, of course we will have the “Thanksgiving Ceremony” or Pahalipay sa Kadayawan that will start at 6pm in Rizal Park. This is to express how thankful the “Dabawenyos” for the beautiful harvest of fruits, vegetables and flowers also, for the tranquility of the place and the pride of the wealth of culture.

Kadayawan Festival shouldn’t be missed! Now, keep that dates available because Davao comes alive on that days and it’s a time of fun and amusement. Its fast approaching, get excited and savor that days!