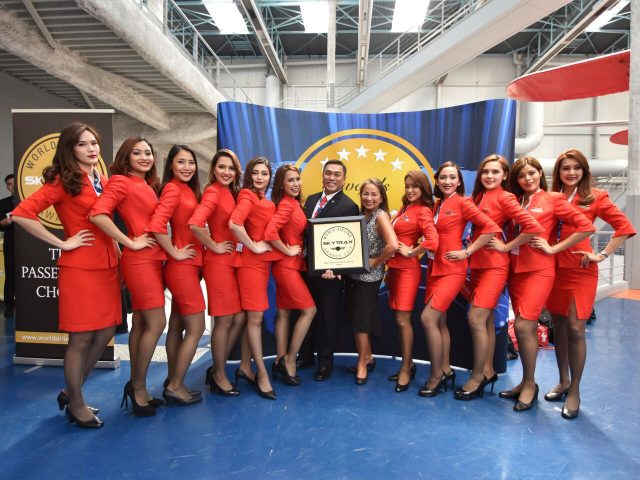 AirAsia Group Cabin Crew Head Suhaila Hassan, who has been with the company for 20 years, accepted the award, flanked by AirAsia ambassador David Foster and Brazilian football player Roberto Carlos.

Foster is a world-renowned Canadian producer, musician, songwriter and composer who has won 16 Grammy Awards from 47 nominations over the span of almost four decades, while Carlos is a famed left-back who helped Real Madrid win four Spanish La Liga titles and was part of Brazil’s 2002 World Cup winning team.

Dubbed the “Oscars of the Aviation Industry”, the Skytrax Awards are the global benchmark of airline excellence with over 19.9 million customer surveys completed worldwide by more than 105 nationalities, measuring standards across 49 key performance indicators of an airline’s frontline products and services.

“We take the world champion title seriously and we will strive to continue to improve for both our guests and shareholders. Over the last 15 years we have created a great brand and over the next 15, we want to move towards One AirAsia, a truly Asean community airline. We also want to recreate ourselves as a digital airline and use technology to drive more value.

“We are humbled for the support shown by our valued guests and we thank them for voting for us nine times in a row. We asked David and Roberto to accept this award with Suhaila to inspire our staff to emulate these two amazing gentleman in music and sports to be world champion and be the very best in all they do.”

AirAsia Group Cabin Crew Head Suhaila Hassan said, “What an amazing honour to be given the opportunity to accept this award on behalf of AirAsia and my fellow Allstars. They are the real champions. It’s been an incredible 20 years, being part of AirAsia’s journey from a domestic Malaysian airline to the world’s best. We have a great team fueled by passion, hard work and dedication, and I have no doubt we will continue to live up to our reputation as the world’s number one LCC as we expand to China, Vietnam and beyond.”