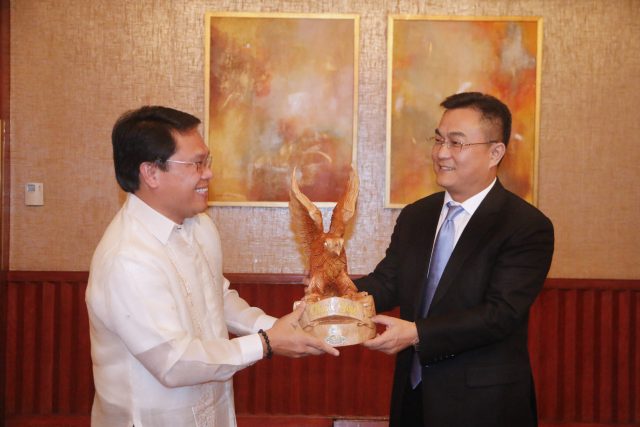 The Palm City of the Philippines formally established partnership with the Coconut City of China.

Tagum City achieved a great feat once again as Mayor Allan L. Rellon together with the city officials signed a twinning agreement with Haikou City of the Hainan Province, People’s Republic of China, represented by its Mayor Ni Qiang with some Chinese delegates last July 21, 2017 at Shangri-La Hotel, Makati.

The cities sealed the deal of mutual understanding and friendship between Filipinos and Chinese people and to develop friendly exchanges and cooperation between Tagum City and Haikou City.

This is in accordance with the principles of the Joint Communiqué on the Establishment of Diplomatic Relations between the Republic of the Philippines and the People’s Republic of China.

The two sides concurred to exert efforts on the basis of equality and mutual benefit, to promote exchanges and cooperation in the fields of commerce, education, culture, and tourism. The agreement is expected to boost the mutual understanding and economic prosperity of both sides.

During the bilateral meeting prior to the signing ceremony, Mayor Rellon shared with pride Tagum’s achievements following the ten point agenda of the city’s government.

He also stated that while Tagum is still young, it is one of the most competitive cities in the Philippines.

In reply, Mayor Ni Qiang invited the city’s delegates to visit Haikou City as soon as possible and discuss further the details of the said agreement. He expressed his delight in their friendly relationship and is hoping to visit Tagum City as well.

Haikou City is located at the northern part of the Hainan Province which is the second largest island in China. It also known as the “Coconut City” of China while Tagum City is dubbed as the “Palm City” of the Philippines, proving their sisterhood ties in another aspect.

Prior to the actual signing of the agreement, Mayor Rellon presented a token of appreciation to Mayor Ni Qiang which is an eagle sculpture which symbolizes the EAGLE WINGS development agenda of the City Government of Tagum. In exchange, Mayor Ni Qiang gave a car model to Mayor Rellon which represented their city’s focus on local economy, culture, and transportation.

The agreement was witnessed by House Speaker Pantaleon Alvarez and China’s Ambassador to the Philippines Zhao Jianhua. The signing ceremony was held at Shangri-La hotel, Makati City. Ziyarah Manalo/CIO Tagum