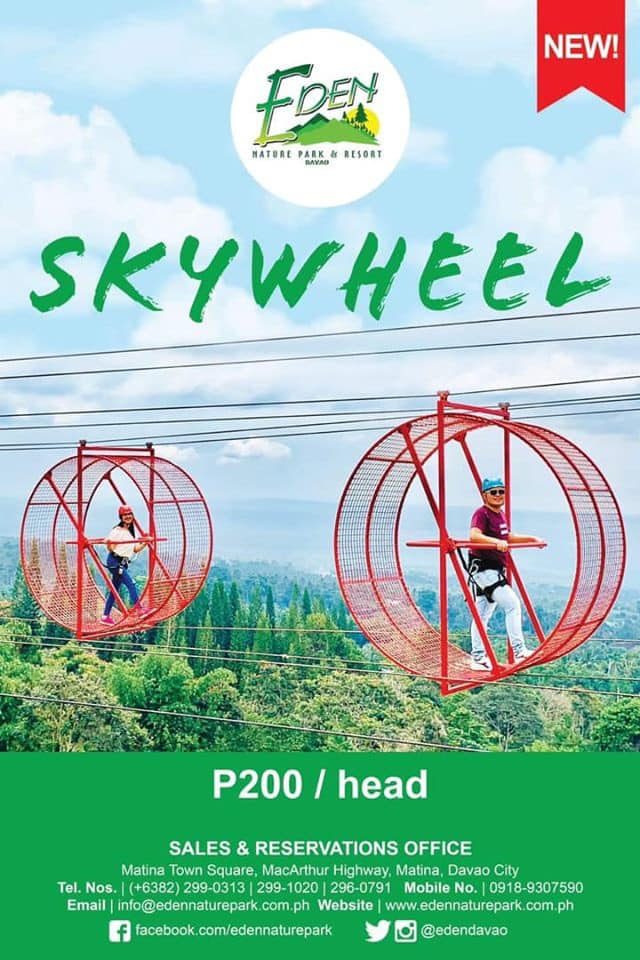 Eden Nature Park and Resort or more commonly known as “Eden”, is one of the most popular and most visited mountain resorts in the Philippines today that offers a plethora of exciting things to do and heart pumping adventure. It is a nature lover’s paradise and a superb tourist attraction that offers tons of activities and amenities for all ages.

After Eco-tourism and Agri-tourism, a third leg — what we call as Adventure Tourism– was added to the resort’s activities. This was to make Eden also cater to the younger and more adventurous generation. First up was the Skyrider, more popularly known as “zipline” which was introduced in 2008.

Finally, in 2015, Eden launched the Skyswing, setting the bar of adventure rides to a higher level. The Skyswing is another first-of-its-kind in the Davao Region.

Eden Nature Park and Resort is pleased to introduce its newest extreme attraction– the SKYWHEEL. Skywheel is another one-of-a-kind feature where guests can walk inside a wheel while it’s up 60 ft. high. The Distance of 200 meters will take approximately 15 minutes to tread. If you are weighing at least 50 kilo grams, you can enjoy the most thrilling ride in Davao City.

There are three wheels available than can travel at the same time.

Safety is our paramount concern. We have our trained attendants and operators to ensure your safety significantly enhanced by securing you a body harness and safety gears especially ordered in France.

The ride is marketed to both thrill-ride enthusiasts and patrons seeking an extreme ride experience as part of their bucket list.

The Skywheel is open Monday to Thursday from 1 PM to 5 PM and on Friday to Sunday at 8 AM to 5 PM.

Eden Nature Park and Resort is a member of the JVA Group of Companies based in Davao REgion and is located in Barangay Eden, Toril, Davao City. It is about 30 kilometers from the city proper and is situated at around 3,000 feet above sea level. Since it started operations in October 1997 it has evolved from a simple nature park to a multi-activity tourist destination.