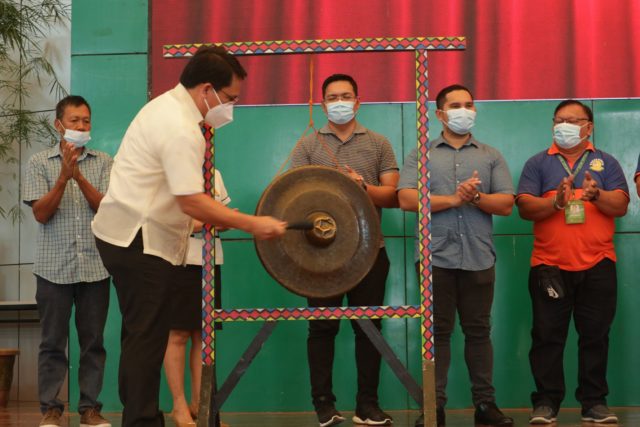 TAGUM CITY – Two of this month’s celebrations namely the CSC Month Celebration and the Handurawan Festival were officially launched last September 7, 2020 during the monthly Monday Convocation Program of the City Government of Tagum.

Despite the restrictions on public gatherings and on holding of events due to the threats brought about by the COVID-19 pandemic, the City Government of Tagum innovates its means in celebrating the trademark festivals slated for the month of September – this time using the online platform in most of their features.

This month, the Local Government Unit of Tagum joins the whole nation in celebrating the 120th Philippine Civil Service Anniversary and a month-long run of activities and events relevant to public service are set for the dedicated employees of the local government such as a series of virtual conferences, online recognition of retirees and awardees, among others.

Also, in recognition of the city’s beloved Lolos and Lolas, the LGU Tagum commenced the Handurawan Festival which aims to celebrate the lives of the senior citizens in Tagum and give honor to their contributions in the society.

Spearheaded by the City Social Welfare and Development Office, among the activities set for the Handurawan Festival are the giving of social pension for the senior citizens which will be distributed per barangay on September 21 to 24, as well as the Bisita Amuma: Kaagapay Pang Medikal which is a medical service for identified senior citizens by the Tagum City Social Services and Gender and Development Unit on September 24 to 25.

Tagum being a Home of Festivals continues to live up to this moniker by finding ways to carry on its notable festivities without putting at risk the lives of its constituents, thereby bringing joy and hope to every Tagumenyo within the comforts of their homes, and realizing that this health crisis is not a hindrance to the services they deserve. Drex Rafols/CIO Tagum