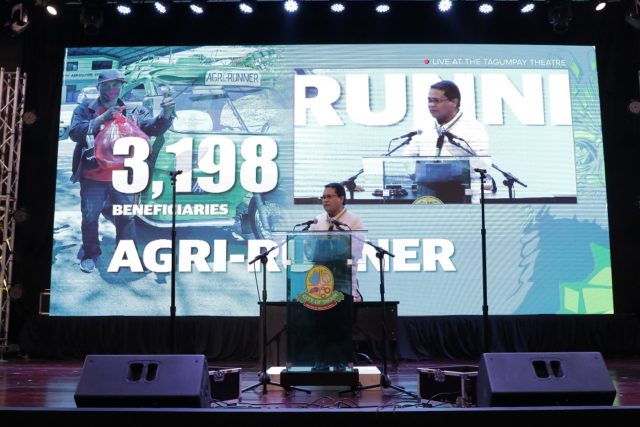 Tagum’s newest landmark started to beat in the heart of the city as the Tagum City Historical and Cultural Center was officially inaugurated in time for the celebration of the 23rd Araw ng Tagum on March 7, 2021.

The official blessing and inauguration of the City Historical and Cultural Center which was officiated by Bishop Medel Aseo and led by Mayor Allan Rellon and Vice Mayor Eva Lorraine Estabillo, was the final event of the four-part series of blessing and inauguration of the said Center – preceded by Kanduri of the Moro community, Pagkuyab of the Tipanud community, and the blessing of the newly refurbished Freedom and Rizal Parks.

The City Historical and Cultural Center, now considered as the “Mother of all Infrastructures in Tagum City”, houses state-of-the-art modern facilities such as the vibrant City Library and Learning Commons, the 1,000-seater Tagumpay Theater which is the first of its kind in the entire Davao Region, the Kagikan Museum which is a Tagumenyo heritage museum that showcases the colorful culture and tradition of the city’s tri-people, as well as the Sentro Rizal Gallery.

On the other hand, Mayor Allan L. Rellon delivered his 7th State of the City Address at the Tagumpay Theater, boldly declaring that the state of Tagum City is continuously very strong, and highlighting breakthroughs that the City Government of Tagum had accomplished despite the challenges brought by the COVID-19 pandemic and positivity amidst such health crisis.

Furthermore, Mayor Rellon also promised to dedicate his remaining days as the local chief executive to achieve more great things for the benefit of the Tagumenyo constituents. With the construction of the City Historical and Cultural Center already complete, Tagumenyos still have so much to look forward to as more big-time infrastructure projects are already underway.

The inauguration of the Tagum City Historical and Cultural Center, and the 7th State of the City Address are part of the BIG MARCH 2021 Celebrations, along with the 23rd Araw ng Tagum, Mutya ng Tagum City, Musikahan Festival, and Tagumpay Festival.

Although the City Historical and Cultural Center is already inaugurated, all the facilities inside the Center will formally open to the public on April 1, 2021 as the Center Management will utilize the remaining time to put into place the necessary operationalization guidelines in light of the COVID-19 pandemic. Drex Rafols/CIO Tagum