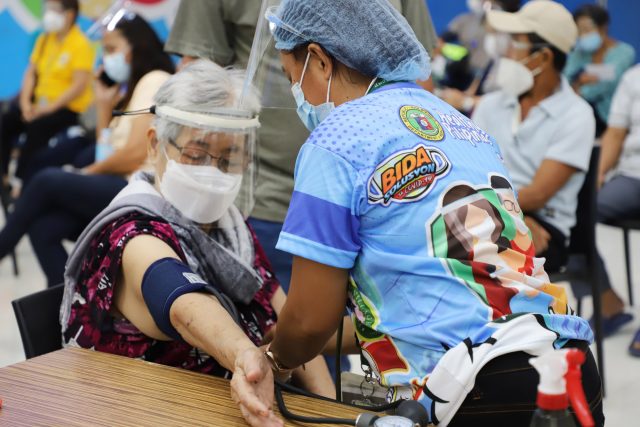 Tagum City – In what was thought to be a difficult campaign, the vaccination drive in the City of Tagum got a positive turnout when thousands of frontliners and senior citizens volunteered to take their first shots during the first quarter to second quarter of the year.

Tagum City recorded a total of 8,515 vaccinated frontliners and senior citizens who received their first dose of the COVID-19 vaccine, while 2,693 individuals completed the process by receiving their second dose.

As of the record of the first week of June, the city accomplished 85% and 75% of first dose and second dose target, respectively, for frontliners which are both above the 70% required completion of the Department of Health (DOH) and had accomplished 30% for the first wave of the first dose for senior citizens. This result is attributed by the Tagum City Health Office (CHO) to the willingness of the people to get vaccinated amidst the negative issues surrounding the vaccines.

It can be recalled that Tagum was the first city in the Province of Davao del Norte to administer the first jabs and had been very active in promoting the Resbakuna Campaign of the DOH. In addition, the city’s local chief executive (LCE) was also the first LCE in the province to get vaccinated. This after the DOH announced the re-assignment of LCEs as part of the A1 priority group which includes our frontliners against the dreaded virus.

In an interview after his inoculation, Mayor Allan L. Rellon urged the Tagumenyos to stop fearing the vaccine and get vaccinated since it would lessen the effects of the symptoms and decrease the mortality rate among the most vulnerable citizens of the country.

Furthermore, some leaders of the various sectors of the society voiced out their support to the campaign and encouraged their fellow Tagumenyos to pre-register at the online link available at the official Facebook pages of the City Government of Tagum and City Health Office Tagum and/or at their respective barangay halls and health centers.

Meanwhile, the CHO of Tagum is gearing up for another wave of vaccination this June 7 to 28 for the senior citizens who are the second priority of the campaign. Another vaccination site is being eyed to cater the said clients as well and a text confirmation scheme is going to be implemented so as to minimize the influx of people at the venues.

Tagumenyos are reminded to bring their QR codes, ballpens, IDs, and food and drinks to allow for smooth transaction. Minimum health standards such as wearing of face mask and face shield, and using of hand sanitizers are still being strictly implemented. Ziyarah Manalo/CIO Tagum