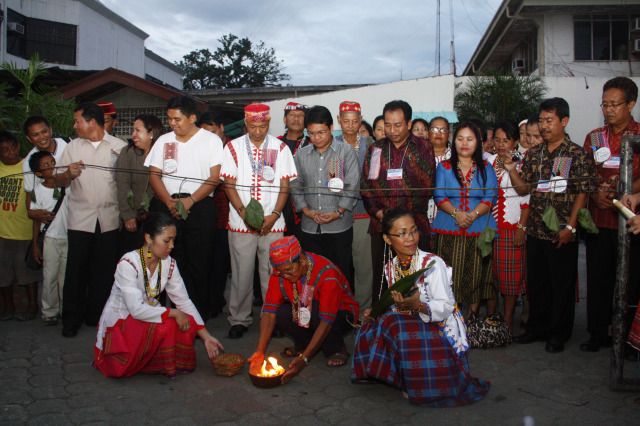 One festival ends and another one will begin.
The 11th edition of Tagum City’s Kaimunan Festival offered a prelude to the great festivities of the city’s indigenous peoples by kicking off its week-long trade fair at the Freedom Park last September 30, 2013.
Mayor Allan L. Rellon and the city’s first Indigenous Peoples Mandatory Representative Datu Rudy T. Onlos led in the trade fair’s opening ceremony along with some members of the 6th City Council, visitors from Indonesia, government employees and members of the IP community.
Stalls offering native and commercial delicacies and goods mushroomed in the Freedom Park for the trade fair leading up to the grand celebration of the Kaimunan Festival which will commence on October 6 and will conclude on October 10.
This year’s festival is pegged on the theme “Sampuru aw isa kaumay yang Pagdaraday nang Allag Pagkumpas nang Dailaw-Dailaw nang Tagallang na Magbabaya sang mga Tipanud adi Tagum,” literally translated to “11 years of God’s blessing, protection and guidance to the Tipanuds of Tagum.

During the five-day Kaimunan celebration, series of activities are lined up that includes a tipanud art workshop, IP kids day, free civil registration for IPs and the grand celebration on October 10, where the indigenous peoples will converge in the Tagum City Pavilion to celebrate their rich heritage and culture. Louie Lapat of CIO Tagum