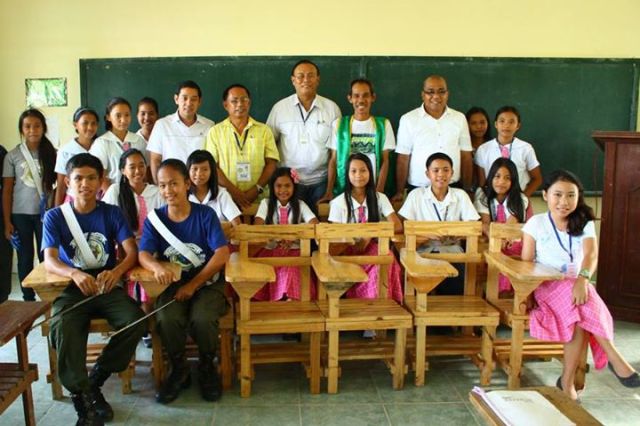 A public elementary school in Davao City and a government secondary school in nearby Panabo City got 150 units of wooden arm chairs each from the Aboitiz-owned electric utility Davao Light & Power Co.,Inc. The donations were turned over Wednesday, September 18, and Thursday, October 24, 2013, respectively.

Davao Light’s Manager for Corporate Social Responsibility (CSR) Vic N. Sumalinog turned over the chairs donation at Matina Central Elementary School. At Southern Davao he was joined in by Asst. Vice President and Davao Light Panabo Branch Manager Engr. Reynold Felix and Community Relations Department Supervisor Fermin Edillon for the arm chairs turn-over. These were received by the schools’ respective principals, facilities in-charge and witnessed by some teachers and students.

In his turn-over message at Southern Southern Davao National High School, Engr. Felix emphasized that the chairs are made of used wood coming from crates of imported machinery and equipment. Engr. Felix said converting crate materials into arm chairs for students is part of the company’s advocacy for sustainable programs for the community.

He also urged the students to take care of the arm chairs so these will last long and the students who will come after them in the years to come will still be able to use the same furniture.

For his part Southern Davao National High School principal Manuel Esperanza committed to ensure the chairs’ preservation and be spared from whatever kinds of vandalism.

The same commitment was also made by the principal and other officials of Matina Central Elementary School when they received the arm chairs from Davao Light.

They also said the 150 wooden arm chairs will surely provide the students ease inside the classroom thus enhancing their capability to absorb the lessons taught.

On the part of the company, utilizing crates in producing arm chairs is one way of sparing several trees from being felled down for the purpose of producing seats for students. In effect, this will help reduce the pace with which the country’s forest resources are depleted.