We’ve tried dining at Sukidesu Obrero near Alcatraz Penal Bar. The place has two floors but the second floor is not yet open to the public. More interestingly, the second floor is a zushiki concept, wherein you can squat together with your families and friends.

Among their specialties, I would recommend their Torikatsu Bento and Tempura Bento. For as low as Php145-150, you can already have a sumptuous Japanese dinner.

We also ordered the Ajitama Ramen, as they suggest it as the best seller among the Ramen. But for me, the taste needs improvement.

Also, we take the chance to taste their very own maki (Sukidesu Maki).  Its price does not compromise its taste. If you will look at their Facebook page, there are a lot of people who commended their maki as well.

You might wonder why do they have cheap prices for Japanese food. It is all because the main goal of Sukidesu Modern Japanese Cuisine is “to provide Quality and Tasty Japanese Cuisine without breaking the bank”.

If you wish to try their food, make sure to dine before the peak hours. Respectively, lunch starts at 11 am-2pm while dinner is 5pm-1am daily.

For more concerns and inquiries, you can message them on their Facebook page  Sukidesu Modern Japanese Cuisine. 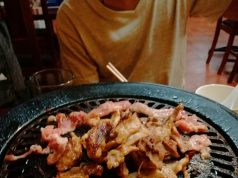