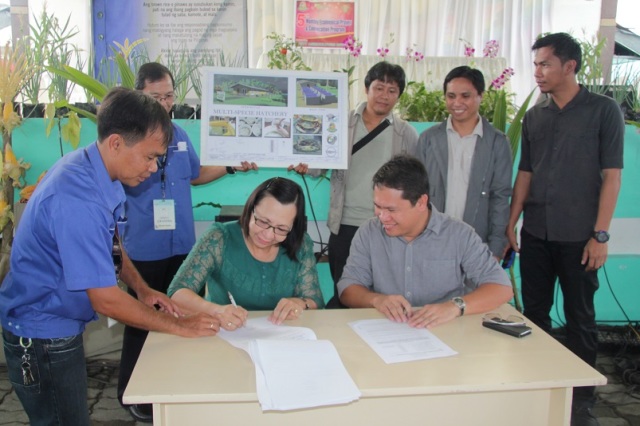 CITY OF TAGUM, DAVAO DEL NORTE—This city’s local government through the City Agriculture Office (CAGRO) is now on the move for the construction of a community-based multi-species hatchery in Barangay Liboganon.

The said facility is worth 1.2 million pesos and is funded by the Bureau of Fisheries and Aquatic Resources under the Department of Agriculture.

The site where the multi-species hatchery will soon rise is actually a land owned by the Obero Family along the shoreline of Barangay Liboganon, adjacent to the CAGRO sub-office.

Obero family authorized the city government to use the land through the signing of the deed of usufruct between the local government and their family represented by Mrs. Denia D. Obero.

The signing of the deed of usufruct was done last November 4, 2013 with Mayor Allan Rellon and Mrs. Obero affixing their signatures in front of the city hall employees gathered for their monthly convocation program.

City Agriculturist Engr. Harold S. Dawa said the construction of the hatchery will begin immediately and is geared towards the vision of increasing the yield of fisherfolks in the coastal areas of the city, especially that their mandate is refocused on food security under Mayor Rellon’s administration.

Dawa bared it will be fully operational by the first quarter of year 2014. Once operational, the hatchery will be the center for propagation of species, which will then be distributed to qualified fisherfolks and farmers.

The local government under the leadership of Mayor Rellon fully supported the construction of the multi-species hatchery facility since this is line with the advocacy of the local chief executive on agriculture as included in the EAGLE WINGS Program. Louie Lapat of CIO Tagum