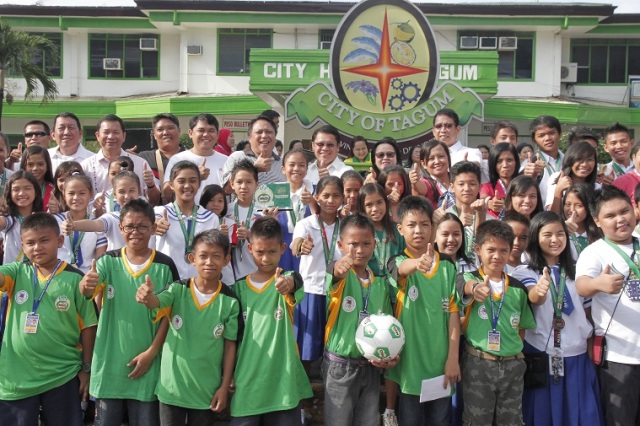 AFTER collecting hard-earned medals in the Milo Little Olympics 2014 at Cagayan de Oro last August 8-10, 2014, the City Government of Tagum led by Mayor Allan L. Rellon recognized the winning athletes for their exceptional achievements and victory.

Awarded during the Flag-Raising ceremony of the local government last August 18, 2014 are the 72 athletes and coaches who bagged a total of 41 Gold, 32 Bronze and Silver Medals in different sporting events like Taekwondo, Discuss Throw, Javelin Throw, Long Jump, 100-meter Hurdle Relay, Scrabble, Volleyball and Swimming.

The winners are now preparing for a bigger target—to collect more medals—in the upcoming National Milo Little Olympics in November 2014 that will be held in Laguna.

The City Sports head Ms. Maria Virginia Obero said she is confident because she thinks this year’s delegation will be the strongest team ever for Tagum City.

Obero added they will continue the sports program the City are implementing as it has been proven to be effective as part of Mayor Rellon’s advocacy under the Eagle Wings Program. | Gleiza Delgado of CIO Tagum

Duterte Says Planners, Killers Must Be Unmasked And Punished