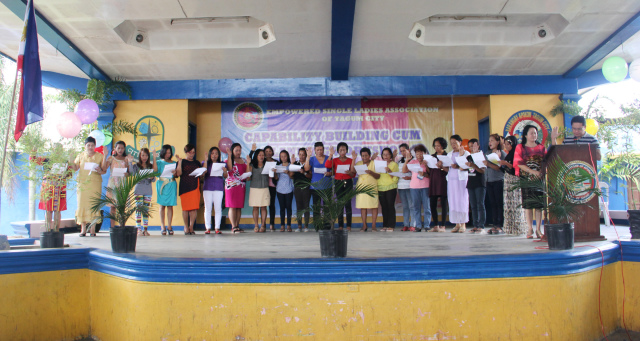 TAGUM CITY—Approximately 7,000 women in this city who are single mothers, widows, separated and single women formed themselves into an association as they start to collectively seek a pro-active role in the community.

Councilor Ester L. Angoy, the adviser of the newly-organized Empowered Single Ladies Association (ESLA), said the group will be an avenue for vulnerable women to freely express their concerns especially in uplifting their socio-economic status.

The officials—both barangay-based and the interim confederation—took their oath of office recently before Mayor Allan L. Rellon who pledged the local government’s all-out support to the cause of the organization.

ESLA was formed after a series of consultative assemblies initiated by the office of Councilor Angoy in all the barangays of Tagum which compelled the lady councilor to push for the creation of an organization that caters the needs and concerns of single mothers, widows, separated and single women.

“Solo parents are considered a vulnerable sector since they shoulder the challenges of parenthood by themselves, hence, they must be given special attention and protection,” stressed the lady councilor.

As such, a sustainable livelihood program for all ESLA members is eyed to help them improve their socio-economic status that could mean they can bring food to their respective family’s tables and feed their children.

After their oath-taking, women leaders engaged in a capability-building and planning workshop to strategize their association’s next moves to achieve a sustainable livelihood program, following the nod of the Department of Labor and Employment to include their association as among the informal labor groups in Davao Region.

In the entire Philippines, an estimated 13.9 million single parents (either mothers or fathers) who carry the heavy burden of raising their families alone.

The national government attends to the needs of this sector through Republic Act 8972, which provides benefits to solo parents and their children. Louie Lapat of CIO Tagum