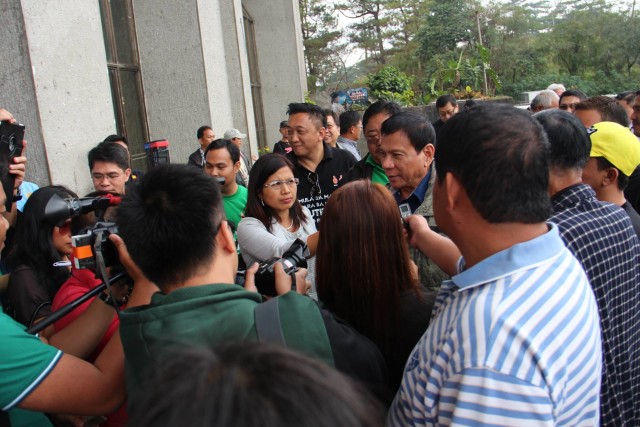 Mayor Rody Duterte’s recent radio and television interview where he once again repeated the statement that he is too old and that he is not interested to be President has sent shock waves to the millions who have been asking him to lead the country.

Am I worried? Of course not.

In the first place, while Rody Duterte has made hints that he may consider the Presidency, he has not categorically stated that he will run.

There was nothing new in his “I am not interested” statement given to ABS-CBN and other media outlets. This has been his consistent position.

But the fact that he has agreed to conduct the “Listening Tour” all over the country to advocate Federalism and feel the pulse of the people on the issues besetting them is an indication that Duterte will in the end yield to the desires of the people.

Duterte is not running? Not now, of course. It is still too early to even make a categorical declaration of his intention.

When he does, I believe Rody Duterte will be the country’s next President.

The clamor of the people for him to lead the country is gaining intensity.

The proof to that was his surprise standing in the recent Pulse Asia survey which showed that he was tied for 3rd and 4th with former President Joseph Estrada.

This was actually the first time his name has been included in the survey on people’s preference for President.

If I were Vice President Jejomar Binay, who has declared his intention to run for President five years ago, I would be scared.

Binay’s 29% share of voters’ preference is not a reason to celebrate. It is, in fact, something that he should be worried of.

This is just an analysis based on the statistics provided by the Pulse Asia.

There is more to be considered why Duterte will win the Presidency easy.

Among all the names being floated for the Presidency, it is only Duterte who carries a message and presents an agenda on how to address criminality, drugs, corruption, the Sabah issue, the West Philippine Sea conflict, the communist insurgency, rural development, food and agriculture and most of all, the Bangsamoro problem.

Duterte’s record in the fight against crime, corruption and drugs and his reputation to be able to instill discipline in a city of almost 2 million which has been named one of the World’s Safest Cities, appeal to people in Metro Manila who are sick and tired of corruption and crime.

All the others, including the veteran politician Vice President Binay, rely on motherhood statements which do not provide a definite approach to deal with the country’s problems.

The Vice President’s ad lines saying “Kay Binay, Gaganda ang Buhay” and “Ganito kami sa Makati…” are worn out cliches will not ring a bell in a country beset with serious problems in crime, drugs, lack of food, China’s expansionism, the Bangsamoro issue and the communist insurgency.

The last factor which would seal the Presidency for Duterte is if either Grace Poe or Mar Roxas, the latter given his slim to zero chances of winning the Presidency, would agree to be the Vice Presidential candidate to the Davao City Mayor.

Poe with her 14% mass support or Roxas’ well-entrenched and well-oiled political machinery will be icing on the cake.

When this happens, it will be all over but the voting and the counting.

As we boxing men say it: “Tapos na ang boksing.”