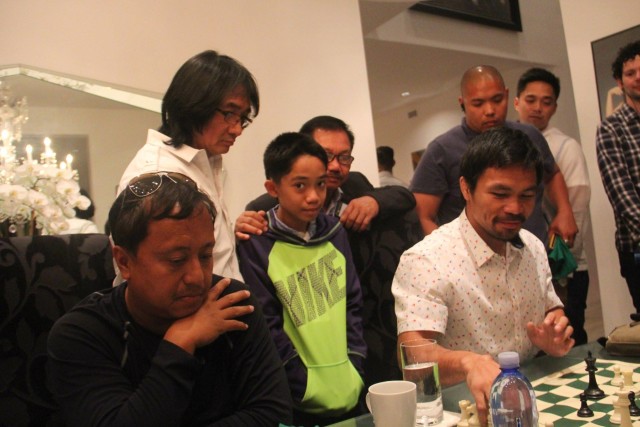 These are Manny Pacquiao’s two main gears when he goes into the centre ring of the MGM Grand on Saturday night, May 2, for the biggest fight of his life, a 12-round clash with the undefeated American champion Floyd Mayweather, Jr.
In a scene which is a replay of the many other nights a few days before his big fights, Manny’s home in Hancock Park, Los Angeles, California was a beehive of all sorts of characters.

There were those who came to sincerely support and pray for him but there were those who held hope that there would be an extra few tickets to the fight.
Manny is used to this mayhem. In fact, I believe it is his way of testing himself on whether he could focus on something in spite of all the distractions.

As people milled around him, he played chess with a former Philippine pro basketball player and later with a Fil-Am priest who has been with him in almost all of his fights.

There was no sign or indication that Pacquiao, 37, who is still a betting underdog five days before the fight, was worried or concerned about the historic clash with Mayweather.

This is classic Manny Pacquiao, a man whose confidence, which others mistake for carelessness, and faith in himself and in God, has achieved the unthinkable.

He is not only installed as one of the greatest boxers of all times but in lifting himself up from poverty through his rare boxing skills, he has also lifted the pride of a nation.
Pacquiao’s success and his unequalled courage in facing challengers and in meekly accepting the results of the fights have become the source of pride for a people who long been looked down and despised.

Last Sunday night, after a church worship and lunch with his family in his favourite restaurant near the Wild Card Gym in Hollywood, Manny entertained his visitors in his home in Hancock.
Today, Monday, Manny will have his last sparring session at the Wild Gym and then drive all the way to Las Vegas to fulfil his fate with destiny.

A win over the brash-talking Mayweather will elevate Manny to the highest pedestal in boxing and become the undisputed greatest fighter of all time.
Confidence is his sword and faith his shield.

He is Manny Pacquiao, a Filipino and a man of God.

(Photos: Manny smiles as he plays chess in his home in Hancock Park as my young son, Bernhart Immanuel, watches. Philippine Star photo shows the bus which will bring Team Pacquiao to Las Vegas from Los Angeles later this afternoon, April 28)