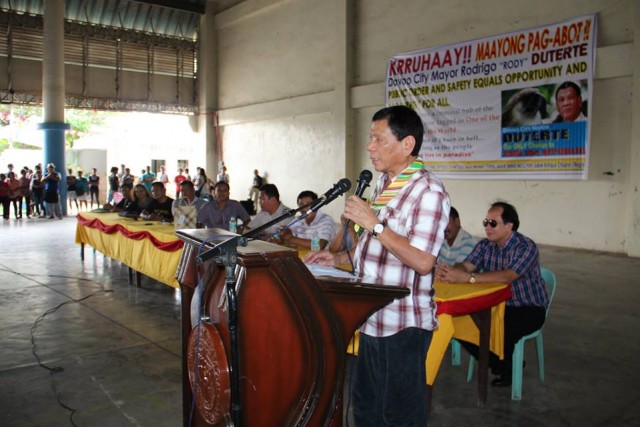 Davao City Mayor Rody Duterte said the continued smuggling of food items into the country, including the controversial fake rice, is an indication of the government’s failed agriculture program.

“For as long as the country could not produce available and affordable food for the Filipinos, smuggling activities will continue,” Duterte said.

“It is imperative that the next President of the country must rank food production, as in Available and Affordable Food, as his Number 1 Mission,” said the tough-talking Mayor of the country’s safest city.

Duterte, whose city was in the news again recently following reports of the presence in the market of fake or synthetic rice allegedly manufactured in China, said the Philippines has become a country of ironies in the field of agriculture.

“We are the only country which is half-submerged in water during the monsoon and typhoon season, yet we do not have enough water to irrigate our rice fields during the rest of the year,” Duterte said.

“We are a country with soil so rich that one Israeli agriculture expert said he could feed the world if he had the whole of Mindanao to farm and yet we import rice, garlic, onions and even mushrooms,” he added.

“We are the only country which could produce raw materials for animal feeds yet we import pork and chicken because the cost of feeds are astronomical,” the Davao City Mayor added.

He said that for as long as the country’s agriculture sector could not produce enough food to supply the requirements of the 110 million Filipinos today, syndicates will continue to bring in lower-priced food items produced in abundance in other areas.

Duterte, whose city is one of the biggest producers of food products in the country, has long been critical of the government’s agriculture programs and priorities saying these are designed by people who have a very shallow understanding of food production.

“Available and affordable food for the Filipinos should be the main mission of Philippine agriculture,’ Duterte emphasised in previous speaking engagements in the different parts of the country.

“Right now, Philippine agriculture is like a child lost in the forest of fancy programs and projects which do not directly contribute to food production,” Duterte pointed out.

Recent reports indicated that the Department of Agriculture under Secretary Proceso Alcala, a former Congressman and an engineer by profession, spent hundreds of millions for the construction of steel structures to house earthworms which process farm wastes into organic fertiliser called “vermicast”.

Critics of the program said constructing steel structures for vermicast production is a waste of money because by simply covering the “vermi-boxes” with coconut leaves, the earthworms could do the job just as efficiently.

“We simply do not have a blueprint for Philippine agriculture which sets targets for food production, where to produce it and how to produce it,” Duterte said.

In a recent trip to Sibalom, Antique where he saw dried up rice fields located very near the huge Sibalom River, Duterte said the next President must make sure that irrigation water is provided to the rice farmers for free.

“We are the only country where the rice farmers are the ones paying for the salaries and operations of the National Irrigation Administration (NIA),” Duterte said.

Duterte also said that the next President must ensure that government is deeply involved in facilitating the marketing of the farmers’ products.

Duterte added that a fair price and ready market for the farmers’ produce will ensure steady supply of food in the market.

He said the main mission of the next President is to make sure that there is available food offered at a price which the poorest Filipino could afford.

“More than anything else, the President’s Number 1 Mission is to feed the Filipino people,” Duterte said.