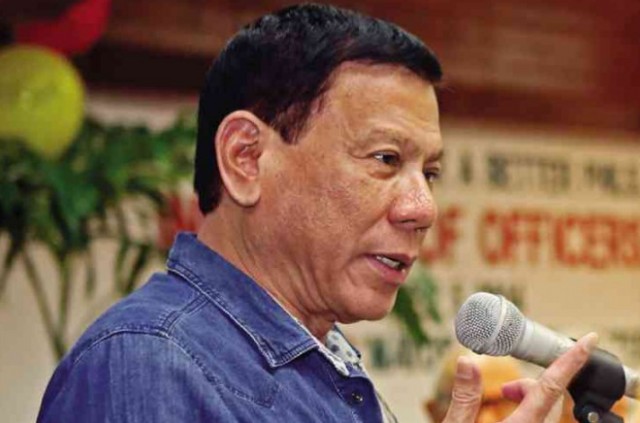 M’lang, North Cotabato – Presidential prospect and Davao City Mayor Rody Duterte, who has consistently declared he does not covet the Presidency, yesterday softened on his hardline position saying that he would follow his destiny.

“The Presidency is destiny. If it is Allah’s will that I will be President, I will humbly submit myself,” Duterte said during a press conference which followed the ceremonies marking the 64th foundation of the town of M’lang where he was the guest of honour.

Duterte’s statement seemed to validate an earlier information shared by his close aide, Christopher Lawrence “Bong” Go, who said that the Mayor may run for a higher position after all.

Go, who is by the Mayor’s side almost 24-hours everyday, said the evident change of heart of his boss could be a result of the recent political developments at the national level and the persistent call of the people for the colourful local executive to lead the country.

Recent political developments at the national level indicate that the citizenship and residency issues hounding survey frontrunner Senator Grace Poe are serious and these could prevent her from running for the Presidency.

Reports have it that criminal charges are being readied by Metro Manila based political groups against the neophyte senator for submitting incorrect information in her certificate of candidacy for the Senate in 2012 which resulted in her topping the polls in 2013.

In the COC she filed, Poe stated under oath that she had been a resident of the Philippines for a period of six years, which is the residency requirement for those running for the Senate.

US government records which were made public recently, however, showed that Poe lost her US citizenship only in 2012 and that she continued to use her American passport in her trips to the US as late as 2012.

The Philippine Constitution requires candidates for President and Vice President to be natural bon Filipino citizens who must have resided in the country for a period of at least 10 years prior to the elections.

With Poe expected to be out of contention and without Duterte in the contest, the Presidential race would be between the Liberal Party’s Manuel Roxas III and Vice President Jejomar Binay.

While Binay is facing serious charges of corruption and unexplained wealth, he is expected to prevail over Roxas.

“The grim prospect of a Binay Presidency is what scares a lot of people and this is what Rody Duterte has been saying as the moment when the Presidency becomes a moral obligation,” said former Transportation Secretary Pantaleon Alvarez, a friend and confidante of the Davao City Mayor.

Several sectors, especially those involved int he advocacy against criminality and drugs have also been very vocal about their preference for Duterte citing his record of turing the once-troubled Davao City into one of the safest cities in the world today.

Overseas Filipino workers and expatriates who worry about the welfare and security of their family members whom they left behind in the Philippines are also among the staunchest supporters of the outstanding Mayor who was called “The Punisher” by Time Magazine for his tough and uncompromising campaign against drugs and crime.

Yesterday in M’lang, Duterte maintained that the Presidency does not excite him and that he does not have the money to finance a national campaign.

He even jokingly lifted his left foot on the table in front of the newsmen to show that he was not wearing any socks.

He, however, revealed that at least five big political funders, whose names he asked not to be divulged, who had talked to him personally to ask for his plans in 2016.

“I told them I am not a candidate,” he said adding that the most difficult part of the presidential campaign that he foresees is having to accept financial contributions from moneyed individuals and groups.

“The people of Davao know that I don’t go around asking for financial contributions during elections because I don’t want to be beholden to anybody,” he said.

When told that there are business groups and moneyed individuals who are willing to contribute because they want changes in the country, Duterte said such groups and individuals are a rarity these days.

“Running and not running are on the table right now,” he said when asked again on what his plans for 2016 are.

“The Presidency is destiny. It is a position which I believe involves Divine Intervention. It is not an ordinary position. You have to lead the nation,” he said.

“I may not like it but if it is Allah’s will, I will have to submit myself,” Duterte added.

He, however, warned the Filipino in a message coursed through members of the media to “prepare for radical changes in the country” should he become President.