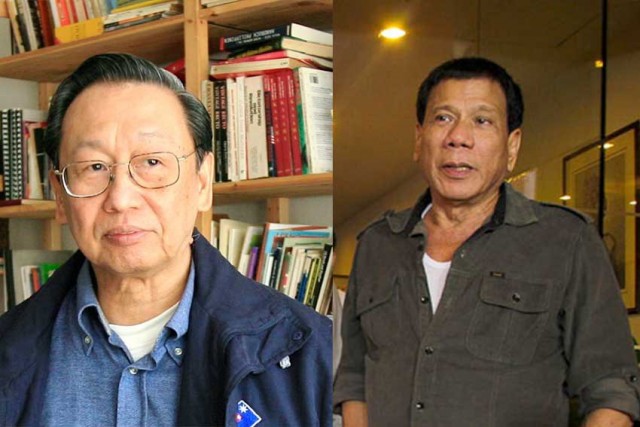 The colourful Davao City Mayor, one of the probable presidential candidates in next year’s elections, made the appeal to the self-exiled Communist leader during an overseas call made by Sison to Duterte.

Duterte received Sison’s call while he was in a middle of a getting-to-know-you dinner with top Philippine Armed Forces officers who have just been assigned to the Davao region.

“Armed struggle as a means to achieve change is passé in the modern world we are living in today,” Duterte said.

“Over 40 years of armed struggle and thousands of lives lost is too much to bear,” said the 70-year-old local executive who is known to have a direct communication line with rebel groups and has facilitated the release of government men held captive by Communist rebels.

“In the modern world we live in today, you would look ridiculous carrying guns and hope to effect change in society through violence,” Duterte said.

“The armed struggle is simply misplaced idealism,” he said.

He said that self-exiled leader of the National Democratic Front (NDF), the umbrella organization of the Leftist Movement in the Philippines, called him up to ask if the Davao City Mayor would find time to travel to Europe before the elections of 2016.

“He said he would like to talk to me and ask me about my plans for 2016,” Duterte told the military officers of his conversation with Sison.

He said he told Sison that he had no travel plans to Europe and that the Presidency was not being considered because of the difficult situation in the country today.

“The Presidency is not an easy job. You have the secessionists in the Southern Philippines and you have the NPAs all over the country,” Duterte said.

Duterte, who admits publicly that he is ideologically left-leaning, told the Army generals and colonels who shared dinner table with him in a Davao City restaurant Wednesday night that the country should unite and address external problems.

The Davao City Mayor was obviously referring to China’s annexation of atolls and islets in the Spratly Islands Group in the West Philippine Sea and the still unresolved Sabah issue with Malaysia.

Duterte’s call on the Communists to give up its armed struggle and participate in the democratic processes to achieve change was received positively by the Armed Forces officers many of whom have seen action against the Communists.

Many of them have also lost foot soldiers and even young officers in the 40-year Communist insurgency which is considered as the “longest Communist revolution” in the world.

“I believe that they (the NPAs) are fighting for a cause but armed struggle is not the way,” Duterte said.

Sison had previously issued a statement that Duterte is a Presidential prospect who is more acceptable to the Left because he has an “open mind” on the issues behind their struggle.

Duterte is known to have open lines with the NPAs which enabled him to secure the release of soldiers and policemen who were captured and held captive by the rebels.

Recently, Duterte allowed a public mourning for one of the most wanted Communist rebel leader who was killed by the military in an encounter, Leoncio Pitao, alias Kumander Parago, whom he considered a friend.

“We cannot continue killing fellow Filipinos. We really have to get our acts together and heal the wounds of this country,” Duterte said.