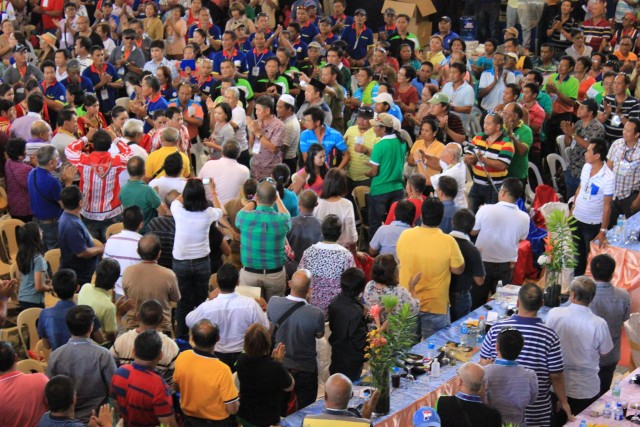 Former Speaker Prospero Nograles said he is willing to set aside rivalry for the sake of the country as he publicly expressed support to Mayor Rodrigo Duterte if he runs for president.

“He will be supported by Davaoenos. I am a Davaoeno,” Nograles told Sun Star Davao.

His son, incumbent 1st district Rep. Karlo Nograles, went even farther saying “no other name” has appeared in his radar after Duterte announced his decision not to run for president.

Nograles told Edge Davao that only Mayor Duterte has the best platform of government for Mindanao, making it difficult for him to choose another presidential candidate.

“No one among them espouses federalism and no one among them knows how to really solve Mindanao’s problems. It is only Mayor Rody,” the paper quoted the younger Nograles.

Cynics and pessimists may dismiss this position taken by the Nograles family as mere posturing. We never run out of cynics in this country. If only we can export them…

The public declaration of support, however, forces Mindanaoans, particularly politicians and businessmen, to seriously consider their positions.

If the Nograleses, who have all the reasons to reject Duterte and support another candidate, can set aside their past animosities to push for Duterte, why not the others?

According to Pulse Asia, Duterte topped the survey in Mindanao with a 29% preference rating. 29%? That is all we can give to perhaps the first Mindanaoan to possibly make it all the way to Malacanang and at least be an equalizer for the region after centuries of injustice and contempt?

More than his being a Mindanaoan, however, Duterte alone among the potential presidential candidates has what it takes to make a difference in the lives of ordinary people especially those in the provinces.

And yet, many politicians, businessmen and academicians prefer to endorse other candidates not because they can offer something better but due to selfish and personal interest.

Maybe it is time for people to realize there is more at stake here than convenience. They do not have the luxury they think they have.

Perhaps it is time for Mindanaoans, and those in the provinces, to make collaborators and traitors pay. I don’t mean inflicting physical harm. Perhaps where it would hurt them most: in their pockets.

“It is considered a sin in a locality not to support somebody who would represent the area in national elections,” the elder Nograles said.

I agree with him.

In response, I am preparing a list of business establishments and politicians who are openly supporting candidates not surnamed Duterte. If only for my personal satisfaction, I will refrain from patronizing them and their establishments at least for the duration of the campaign.

If aiding an enemy in times of war is treason, who is to say they are not traitors to the cause of Mindanao if they don’t support Duterte?

Let it not be said that in a time of moral crisis, I did nothing because my convenience was more important than my principles.

If you feel the same way, SHARE, not just like. We need to get this message across to as many people as possible. If they think they can get away again, they have another think coming.