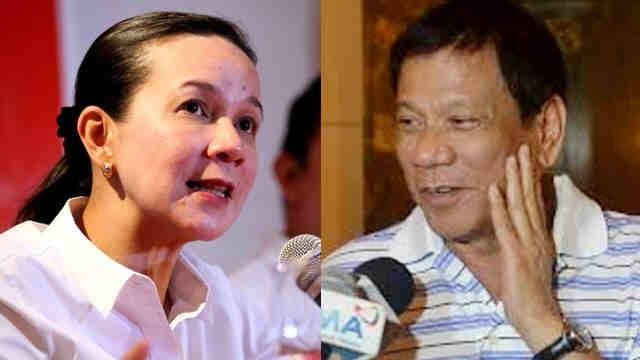 Do not engage Mayor Rody Duterte in a verbal joust if you are not very well prepared.

This is the lesson that neophyte Senator Grace Poe learned today after Duterte swatted her down like a fly following her remarks virtually condemning political dynasties.

A report in the news website Rappler written by Davao City-based journalist Edith Z. Caduaya quoted Duterte as saying “Poe should not be so quick as to dismiss political families since she herself is using her father’s political capital to seek the highest post.”

“Poe’s father, the late actor Fernando Poe Jr, ran for president in 2004 but finished second. It was widely believed he was cheated by the camp of then President Gloria Macapagal Arroyo,” Caduaya’s report said.

(Senator Poe herself won’t be able to run if it were not for her father’s [famous] name. That’s how it is in the Philippines. She is always an example of that – running now because her father ran before her.)

Duterte also urged Poe to read up more on federalism before shooting down the idea and saying it could perpetuate political dynasties.

“I can forgive Poe, her mind is still dwelling in a feudal state,” Duterte said in an interview on Monday, October 5, at the 131st founding anniversary of the municipality of Sta Cruz here.

“We want more autonomous regions is simply because we want to distribute the powers. It has nothing to do with dynasties,” he said.

In his speech before some 3,000 mostly barangay officials in Sta Cruz, he said the fate of the country had always been decided by people in Metro Manila at the expense of the provinces. “Worse, the decisions put our lives in jeopardy.”

Duterte, who has been doing well in surveys despite his indecision over running for president, has been going around provinces even outside Mindanao to speak at forums where the advantages of shifting to a federal system of government is discussed.

During a visit to Butuan City on Friday, October 2, Poe said she would not support Duterte’s advocacy to shift to federalism. She said it will encourage political dynasties.

“For me, we have a problem on political dynasties and, under federalism, there is autonomy and the proposal is by region. What if a particular region is dominated by only one family?” she asked.

Poe reiterated this position in a statement on Monday afternoon, October 5. She said the immediate need is to strengthen local institutions by passing a freedom of information law and an anti-dynasty law.

“This is what we can significantly do even as the federalism proposal goes through the longer route of constitutional amendment to take effect,” she said.

“I have always said that we need regional development to ensure that Filipinos equally benefit from progress. But we have to prepare the ground for political and economic change through effective safeguards and governance reform, so that political clans can’t take advantage of federalism for their own interests,” the senator said.

“Political dynasties must be dismantled effectively to reduce opportunities for corruption and collusion in the regions.”

Asked what can he remember about the Poe’s father, Duterte said: “I have to find out first. In the movies, I can remember. But if it is about governance, I still have to remember because I was not a privy to his campaign.”

Although he continued to say that the presidency is “not my personal ambition,” he told the crowd in Sta Cruz: “I have yet to decide if I’m running. But if I will run, will you support me?”

To this, the crowd cheered, “Duterte! Duterte!” – Rappler