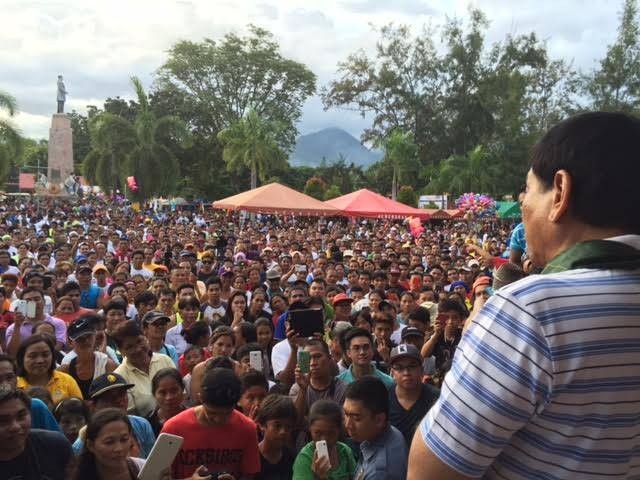 Davao City Mayor and Presidential prospect Rody Duterte today called on the Communist New People’s Army to end their armed struggle and prepare for a new life of peace under his Presidency.

“It is time to end the fighting. Come down from the mountains, come home and let’s talk,” Duterte addressed the Communist guerrillas who have been waging a 46-armed struggle against the government, during his speech in the founding anniversary of Santa Cruz town in Davao del Sur.

Santa Cruz, one of the oldest towns in the Davao Region where only a few families own vast coconut plantations, is known as a hotbed of the NPAs.

Addressing the huge crowd in the presence of Santa Cruz Mayor Joel Ray Lopez, Duterte teased the spectators by asking members of the NPA in the crowd to raise their hands.

“Those who are NPAs raise your hands. Come on, don’t be shy. I know there’s a lot of you here,” eliciting laughter from the crowd which obviously included members of the NPA.

Duterte said that the 46-year-old Communist insurgency has to end and he hopes to achieve that “should God put me there (the Presidency).”

He told the crowd that he was working on the release of a new group of government men who were abducted and held hostage by the NPAs.

“What do you get by holding those people hostage? We have to end this,” he said.

Duterte has successfully worked for the release of NPA hostages in the past, including a provincial jail warden whose wife was suffering from cancer.

He has declared in the past that should he become President of the Philippines, he would bring together the different armed groups to the peace table and find a common ground to end the conflict.

“Filipinos cannot continue on killing each other. This has to stop,” he said.