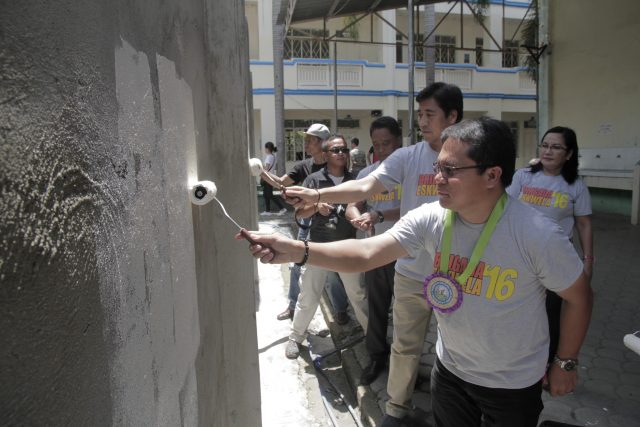 For this year, the local government allocated P300, 000.00 for the acquisition of paints and painting materials that were distributed to all public elementary and secondary schools in time for Brigada Eskwela.

City General Services Officer Jalmaida Jamiri-Morales said each school will receive 15 gallons of paints to be used in the painting and repainting of respective school buildings and classrooms.

Brigada Eskwela is a flagship program of the Department of Education that aims to make schools ready and conducive for classes a week before the formal opening of another school year. This vision is realized through a week-long cleaning and repair of schools, mostly by volunteers from the different sectors of the community.

In his message, Mayor Rellon emphasized that the help of the local government does not end in Brigada Eskwela week. He said he has sustained the operation of the School Improvement and Maintenance (SIM) Task Force that is tasked to oversee school concerns all year-round.

The SIM Task Force, which was created through an executive order signed by Mayor Rellon, is composed of organic personnel of the local government and are mostly from the City Engineering Office.

The local chief executive also bared that the 80-milllion peso term loan of the local government from the Development Bank of the Philippines is now nearing its fruition, as construction of about 68 classrooms and three gymnasiums will soon be over just in time for the opening of the new school year.

Mayor Rellon also bared he will convene this week his security cluster to iron out things pertaining to the safety of school children once the classes will kick off on June 13. A multi-agency security approach will help secure the school children with the help of the Philippine National Police, the Security Management Office, the Traffic Management Office and the various force multiplier groups in the city. Louie Lapat/CIO Tagum