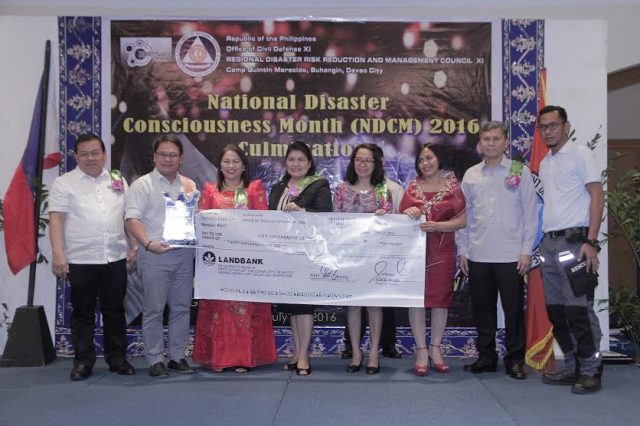 The City Disaster Risk Reduction Management Council (CDRRMC) of the City Government of Tagum was recognized anew as the Gawad Kalasag Award winner for Region XI during the culmination of the National Disaster Consciousness Month last July 28, 2016 at the Grand Regal Hotel, Davao City.

Conferred by the Office of the Civil Defense and the Regional Disaster Risk Reduction Management Council, the award was bestowed in view of the outstanding measures that were affected by the Tagum CDRRMC to prevent and mitigate the ill-effects of the various types of disasters that the city has dealt with in 2015.

Mayor Allan L. Rellon, who heads the city’s disaster management council, intimated that the CDRRMC’s second consecutive win of the region’s edition of the most coveted national award for disaster risk reduction & management and humanitarian assistance can be attributed to the expansion of the CDRRMC’s capability through which the action and response during disasters are strengthened.

This said expansion of capability is best seen through the training of organic and volunteer personnel amidst the establishment of climate change adaptation programs and projects such as the massive tree planting programs and the implementation of measures to ensure infrastructure resilience geared towards mitigating disaster risks in the city.

The establishment of an efficient and effective CDRRMC operation center, the installation of CCTVs in the city, as well as the strategic placement of the Early Warning System and its devices, are also elements that factored in the capability expansion of the city’s disaster management council.

Notably, the institutionalization of the CDRRMC in the local government of Tagum is in line with the    EAGLE WINGS Program, the Rellon- Gementiza Administration’s 10-point developmental agenda on Genuine Peace, Safety and Security.

The Tagum CDRRMC will consequently represent Region XI in the Component Cities Category during the 2016 National Gawad Kalasag: Search for Excellence in Disaster Risk Reduction and Management (DRRM) and Humanitarian Assistance.