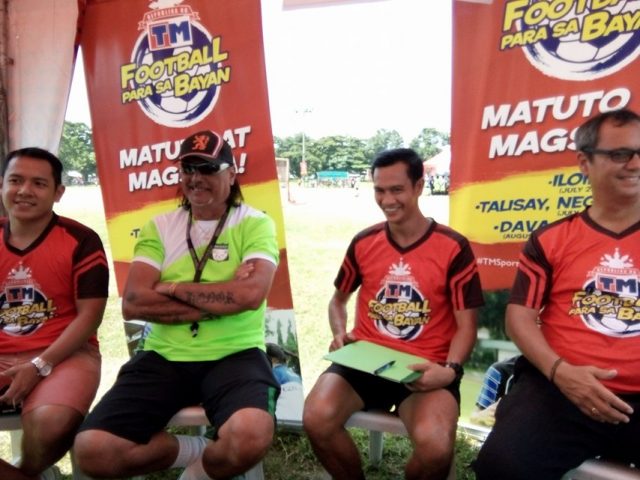 The Astro Kem Bola program has chosen TM Football Para sa Bayan a venue to discover young football talents in the country of all social backgrounds.

On Aug 13, 2016, at the Agro Football field in Quimpo Blvd, they hosted the embarkation of greater opportunities for young football talents in the metro.

2016 is very promising for the chosen young football talents as it will open the gates to pioneer in competing abroad, specifically in Malaysia and Europe via Astro. The team has now strategized to identify football communities providing comprehensive learning, football development experience, and proper coaching techniques from Sulu to Baguio.

Coach Monchu said the Philippines has the talent in football and needs further grinding. There were some who has already been shortlisted. He added that this is a good alliance between Globe and Green Archers United because their common goal is to introduce football in the country.

This advocacy is a way for Globe to influence other private sectors to help out football communities and hope for a bigger program that will build pure Filipino football players that could compete nationally and internationally.

Through the partnership of Globe and Green Archers United for more than 5 years, it is really important for them to hone the skills of the young football talents and even the coaches. They’ve been to San Carlos, Valencia, Bacolod, Dipolog, Iloilo, Baguio, Barotac Nuevo, Butuan, and other football communities to really take part in the growth of football in the country with the grassroots program.

The event was opened to all street football communities, underprivileged kids, varsity players from public and private schools, and private football clubs. TM (Globe) and Astro is in search for more than just exceptional football players based on teamwork, discipline, sportsmanship with communication on and off the pitch, positive attitude towards teammates, volunteerism, attention to instructions, and good personality.