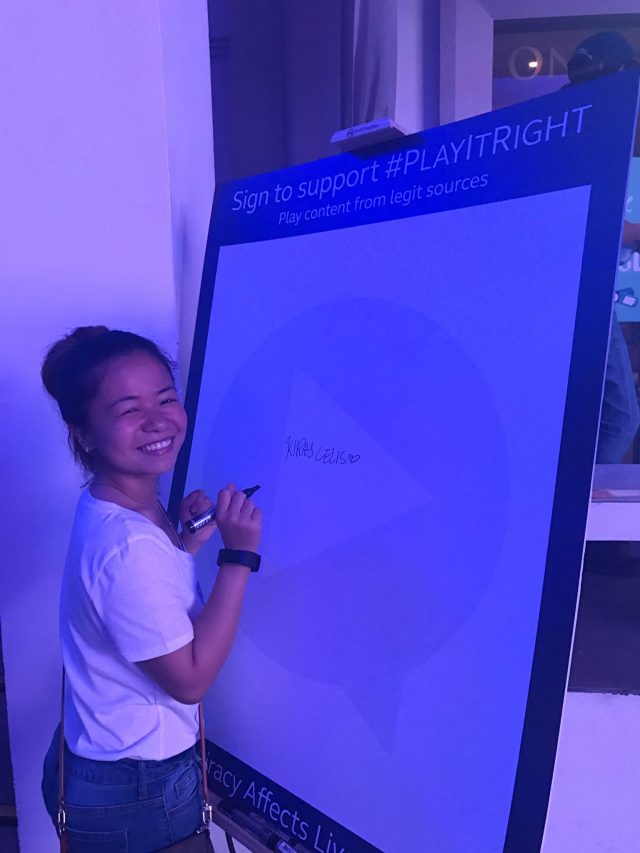 Globe Telecom launched its anti-piracy advocacy called #PlayItRight during the Globe Independent Film Festival (GIFF) Awards Night to encourage its customers and the public to play content from legitimate sources.

Yoly Crisanto, Globe SVP for Corporate Communications said that it is now the moral responsibility of the company to provide its customers with safe and quality content and, at the same time, protect the intellectual property rights of the company’s own original content as well as the licensed content of its global and local partners.

“Every movie, series and other forms of content downloaded from non-legitimate sources create injustice to the people who labored over the creation of these works and could possibly harm hard-earned devices of customers,” Crisanto added.

Crisanto said that the #PlayItRight campaign will send a strong message to the public: to consume digital content the right way. “We want everyone to start having a conscious effort to stop downloading content from illegal torrents or other illegitimate sources because piracy is no longer cool nowadays. Let’s create new habits that would give the people who create content what’s rightfully due them,” she revealed.

In 2014, Globe changed how Filipinos consumed music by introducing Spotify which ended the culture of illegally downloading mp3 music from illegal sources.  Today, Globe continues to be the preferred partner for content distribution by global entertainment brands like Disney, Netflix, HOOQ, Turner, Astro, Sports Illustrated, and Musical.ly. Other than content distribution, Globe also now produces its own original content through Globe Studios.

The launch of #PlayItRight highlighted “Ang Araw sa Likod Mo”, an independently-produced film from An Earth Below Productions in cooperation with the Hero Foundation and supported by Globe Telecom.

The film, which recently won five international awards, was directed by Dominic Nuesa. The film tells of the heroism, redemption, and sacrifice of both sides of the Mindanao conflict. The film will be showing in Ayala Cinemas on May 24, 2016. The cast includes Ping Medina, Bong Cabrera, Mike Liwag, and Ian Ignacio.

Globe is also partnering with big local movie studios such as Viva Films, which agreed to support the telecommunication provider’s anti-piracy advocacy