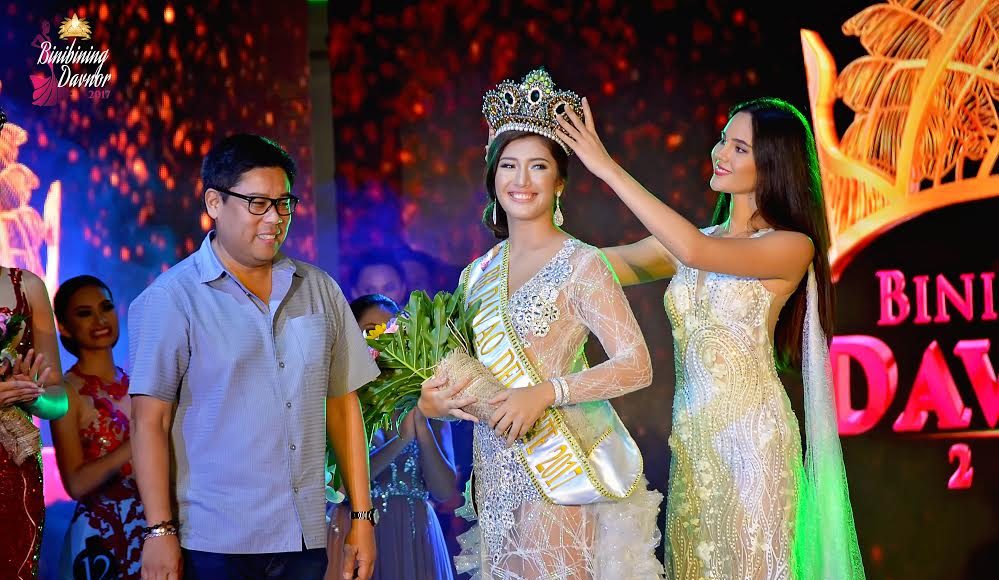 Tagum City, Davao del Norte – After more than a decade since its last edition, the search for Binibing DavNor this year crowned two Tagumenyas as the fairest in the province.

Mary Joy De Castro, a beginner in the world of pageantry, bested 17 other hopefuls in the glitzy search, claiming the crown, the 200,000-peso cash prize and the title to represent Davao del Norte in the next instalment of Binibining Pilipinas.

In the first part of the Question-and-Answer round, De Castro convinced the crowd that she has what it takes to become Bb. DavNor, stressing that her “moral compass dictates her to be a woman for others” and that if given the chance she will use the crown not as a mere accessory but an opportunity to inspire others.

De Castro likewise earned the nod of the judges and the cheers of the crowd in the second part of the Q&A portion, where the candidates were cut to five, after she delivered her interpretation of the province’s tagline: “Basta DavNor, the Best!”

“A lot of things come to my mind but I’ve come to realize that it’s not the beautiful beaches in Samal nor the lush forests in Talaingod. It’s not even the establishments in Tagum, it’s actually the cultural diversity of the people and despite this diversity, we need to understand that we need to be unified in order to make Davao del Norte the best,” De Castro elucidated.

Before joining Bb. DavNor, De Castro was an employee of the City Government of Tagum, assigned in the City Information Office as writer and researcher. While Manuel was an alumna of Mutya ng Tagum for two cycles.

De Castro succeeds a fellow beauty from Tagum City Aisa Mel Chrisly Briones-Pontillas, who won the competition in 2004. Just like De Castro, Briones is also a former employee of the city government.

De Castro also bagged other major awards such as Best in Swimwear, Best in Playsuit and Best in Festival Attire, while Manuel notched the Best in Casual Attire award.

Panabo City’s Ed Goldilaine Flores won as 2nd Runner Up, followed by Myrell Martinez of the Municipality of San Isidro and Princess Faye Fernandez from New Corella as 3rd and 4th Runners-up, respectively.