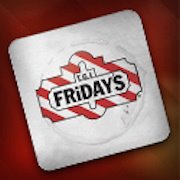 Madayaw Dabawenyos! In the celebration of the Kadayawan Festival 2012, T.G.I.Fridays Abreeza is offering a Kadayawan promo from August 17 until August 19, 2012.

Live DJs on the 17th of August from 7pm onwards. Also check out their bartenders doing bar show and dancing staff.

T.G.I. Friday’s (often shortened to “Friday’s” in most countries, and stylized “FRiDAY’S“, or “T.G.I.s” in the United Kingdom and the Republic of Ireland) is an American restaurant chain focusing on casual dining. The company is a unit of the Carlson Companies. Its name is taken from the expression TGIF. The company asserts that it stands for “Thank Goodness It’s Friday,” although as of 2010 some television commercials for the chain have also made use of the alternative phrase, “Thank God It’s Friday’s.” The chain is known for its appearance, with red-striped canopies, brass railings, Tiffany lamps and frequent use of antiques as decor.