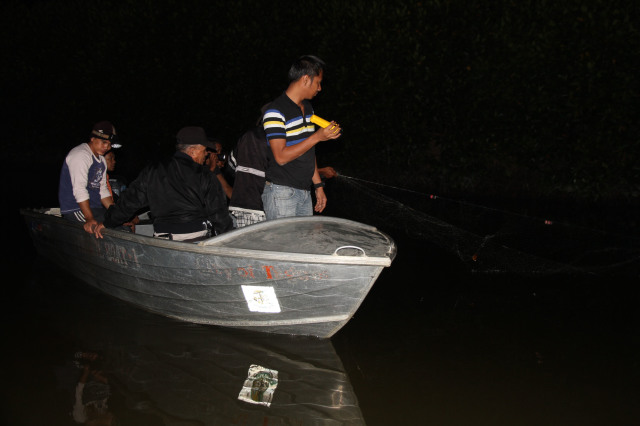 CITY OF TAGUM, DAVAO DEL NORTE—Several illegal fishing materials were confiscated in Tancuan Creek in Barangay Liboganon during the midnightoperation conducted by the Bantay Dagat operatives of the City Agriculture Office last September 27, 2013.

Scores of illegal fishing materials such as tangab and pukot were confiscated by the operatives along the 8.8-kilometer creek, which is known to be rich in marine resources.

The proliferation of these illegal materials can hamper the growth of marine resources along the creek and in the municipal waters of the city.

City Administrator Giovanni Rellon, who personally led the midnightoperation, said the local government is determined to go after these illegal fishers since this is in violation of the local and national laws.

The young administrator stressed the operation was launched after Mayor Allan L. Rellon received text complaints from fisherfolks who aired their concern over the mushrooming of illegal fishing materials in the area.

No single fishermen were apprehended during the midnight operation but their fishing materials illegally installed were destroyed and confiscated by the Bantay Dagat operatives.

City Administrator Rellon added the body tasked to guard the municipal waters of the city will conduct surprise operation from time to time to enforce the law.

Illegal fishing activities are prohibited under Republic Act 8550 or the Philippine Fisheries Code of 1998. Louie Lapat of CIO Tagum