It takes a million of talents and self-confidence to create En Bloc Entertainment because it was never a piece of cake to get through in where they are today.

Headed by Jimmer Ariate, En Bloc Entertainment and Models of Davao Association help their talents to discover new things from their skills to uplift their confidence, become globally competitive and see the real essence of their craft.

Ariate and his team considered En Bloc as one of the greatest achievements in their lives and very much thankful to God for a good jump start. Maintaining a good relationship between their endeavors is their secret in being a successful group.

“I don’t consider myself as a perfect person. I made mistakes and fails most of the time,” Ariate shared. ” As a human being I also do have my own weaknesses. It may overpower me sometimes but I never let it ruin my life. I do believe that we can never learn how to be strong or to be happy if we never experienced failures and difficulties in life. But being optimistic enables me to stand on things I know is right, uplift not just my own confidence but also inspire others to do the same. I also have my own dreams in life.,” he added.

Modeling and Event Organizing is not Ariate’s cup of tea until he was trained and invited to be part of a fashion event as a model. That started it all. His extreme adventurous trait and good skills in communicating and dealing made it all a big shift. He started to build his own career and made a name in the industry through his experiences from the previous group. Ariate and his friends formed En Bloc Entertainment.

Known in providing quality entertainment to their clients, no wonder they are also one of the trusted group by the most promising designers and talented photographers in the metro today.

En Bloc also decided to team up with Davao Eagle Online which is also one of their stepping stone in the industry for a one of a kind fashion event that they’ve never seen before. The October’s Secret: A Fashion Prophecy fashion show held at CAP Auditorium last October 2012 serves as their biggest jumpstart that gave birth to Models of Davao Association. A tarpaulin isn’t even enough to put a lot of sponsors who supported the event. Photographers from Philippine Fashion Week,  fashion bloggers, prominent fashion gurus also visited the event. The show ended with a big splash. 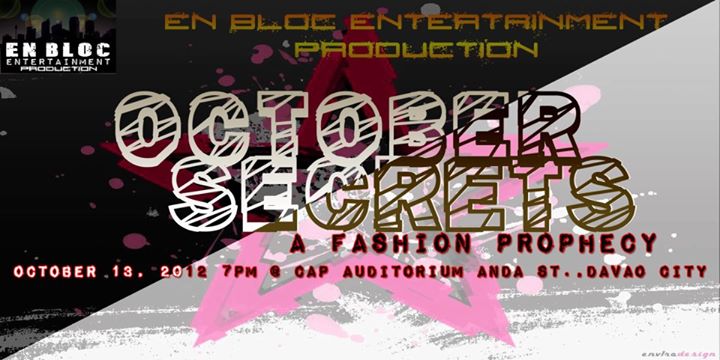 En Bloc Entertainment and Models of Davao Association continued to shine bright and filled the Grand CAP Auditorium with dazzling colors last December 2012 through its Fashion Festival 2012: The Aggrandize of Colors. With it’s 4 cam setup, big Screen backdraft and numerous photographers and sponsors it is safe to say, they did it all over again. The team stood proud as their show gathered a lot of compliments not just from the Davao audience but also from international photographers and foreigners who visited the city for this one-of-a- kind fashion event.

“Until now I’m still looking forward to make another event that will change the views of the people about how fashion in the Philippines could be as competitive to other countries and my main goal is to start the change here in Davao City. As time goes by, new ideas and partnerships will be made as we upgrade our services. En Bloc Entertainment & Models Of Davao Association aims to upgrade to a bolder deck of talents in which we will not just concentrate in modelling but also in acting, singing, dancing and hosting. With the help of our newest set of affiliates, together we will strive in discovering Davao’s premier and fresh talents.,” Ariate ended.