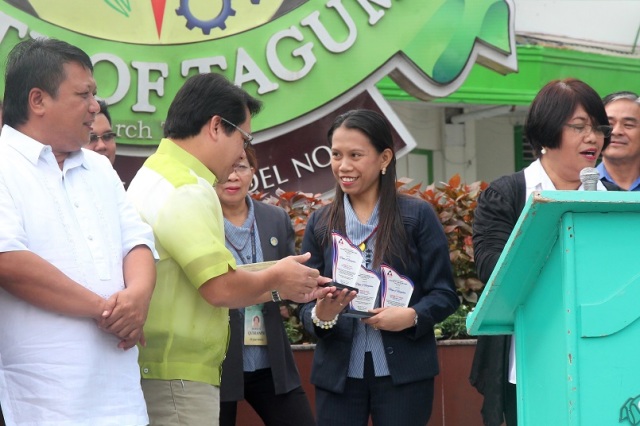 CITY OF TAGUM, DAVAO DEL NORTE—The city government’s Public Employment Services Office maintained its winning streak with its latest awards handed out by the Department of Labor and Employment.

PESO Tagum clinched the title as Best PESO Office for Component City in Region XI, automatically making the office as Davao Region’s official entry to the National Search for Best PESO Office, a search that has been topped by Tagum in recent years.

Said recognition was awarded January 16, 2014 during the Regional Mid-Year Performance Evaluation of DOLE XI in Digos City, and was re-enacted last January 27, 2014 at the city hall’s flag ceremony.

Mayor Allan L. Rellon congratulated the PESO Office for its achievement especially that they have become the front liners of his administration in the fulfillment of its agenda on employment under the EAGLE WINGS Program.

Aside from the Best PESO Office Award, Tagum was also recognized for its excellent implementation in Career Guidance and Coaching, implementation of the Special Program for the Employment of Students (SPES) and Skills Registry System.

PESO Chief Rogeneth Llanos said this award shall continue to inspire them to work harder for the benefit of the Tagumeños. | Louie Lapat of CIO Tagum